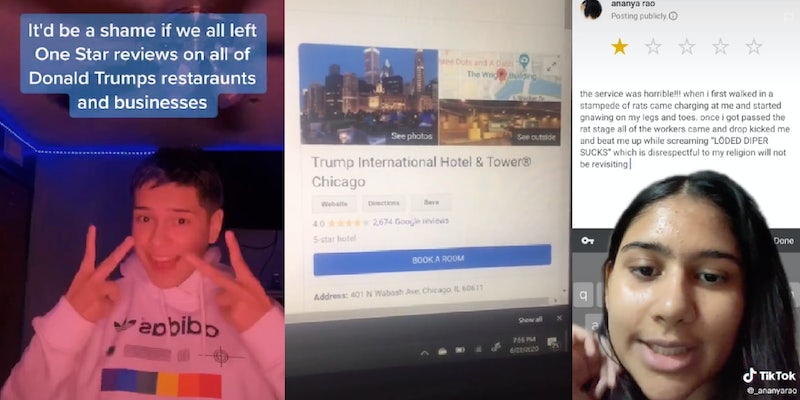 'It would be a SHAME if we all left bad reviews on Trump Tower.'

After they trolled his Tulsa rally and online store, TikTokers are now trying to review-bomb President Donald Trump’s businesses.

A TikTok user, who goes by “Angel,” urged viewers to leave “One Star reviews on all of Donald Trumps restaraunts (sic) and businesses.”

Angel told the Daily Dot he came up with the idea after seeing other TikTokers sarcastically “saying it be bad if people left low star ratings on his businesses.”

Some videos show users leaving one-star reviews themselves and urging others to do the same.

TikTokers are apparently heeding the call by leaving one-star reviews on his businesses’ Yelp pages as well as on Google reviews.

Leaving negative reviews for his businesses out of spite is probably not a new phenomenon, however, there is an influx of recent ones.

One review simply states “Fuck Trump” on a loop. Back in June, the hotel was receiving numerous five-star reviews.

Trump Grill, Mar-a-Lago, and Trump Tower, along with other properties carrying his name, have also similarly been affected by an onslaught of recent one-star reviews.

Angel told the Daily Dot he thinks review-bombing is a good way to hold people in power, like Trump, accountable.

“We need to be heard and our president needs to focus on the futures of future generation such as black/Indigenous and LGTBTQ+ communities and have them feel accepted and welcomed in our country,” Angel said.