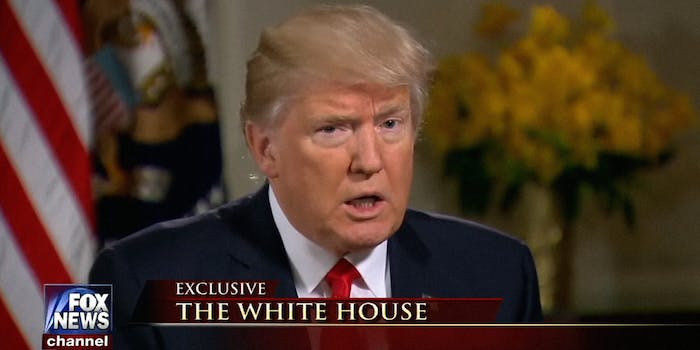 As his 100th day in office fast approaches, much of Trump’s promised change goes unrealised. The interview proved to be a necessary opportunity to bring clarity to his domestic and foreign policy agenda after a seismic week.

Urgently, the president addressed public speculation over his intentions in Syria, following his recent military action against the regime of Bashir al-Assad—a missile strike he told the Chinese president about over “the most beautiful piece of chocolate cake.” Trump also accidentally said he’d ordered the missile strike on Iraq before host Maria Bartiromo corrected him.

Trump remembers details of cake he was eating while launching missiles, but not which country he was attacking. pic.twitter.com/TYfqXXDeCZ

The intervention, however, has alienated some of his most right-wing supporters.

“We’re not going into Syria,” he told Bartiromo. “But when I see people using horrible, horrible chemical weapons… and see these beautiful kids that are dead in their father’s arms, or you see kids gasping for life … when you see that, I immediately called General Mattis.”

On North Korea, however, Trump maintained a hard-line stance, showing no intention of backing down. Officials told Reuters on Monday that a U.S. Navy strike group, consisting of the USS Carl Vinson aircraft carrier and its support ships, have been ordered to redeploy to the Korean peninsula in a move that has heightened tensions dramatically in the region.

“We are sending an armada. Very powerful. We have submarines. Very powerful, far more powerful than the aircraft carrier, that I can tell you,” Trump said confidently, before calling on China to stand with his administration.

Faced with questions related to his frustrated domestic policy and unfulfilled campaign promises, the president was light on details but assured that their resolution was in the pipeline

When Bartiromo questioned when Trump planned to implement the “historic” tax reform he vowed on the campaign trail, he told her that his initial August deadline would be pushed back to concentrate efforts on passing healthcare reform.

“We’re going to have a phenomenal tax reform. But I have to do health care first. I want to do it first to really do it right,” he said, calling the Affordable Care Act a “disaster” and “mess.”

Trump went on to say that he regarded the confirmation of Supreme Court Justice Neil Gorsuch as well as his rollback of the Obama administration’s business and banking regulation to be the most significant achievements of his first 100 days. Whether his electorate will agree remains to be seen.