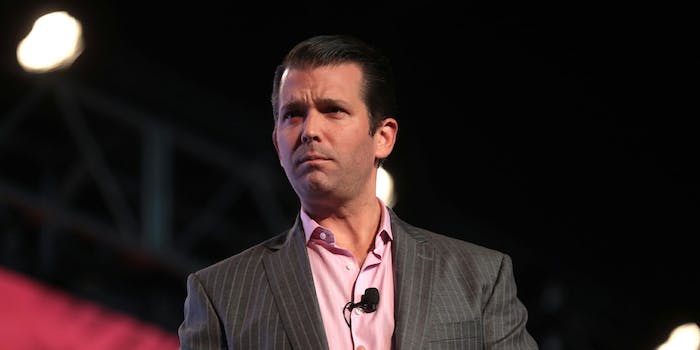 Friday in Christchurch, New Zealand, a gunman went to at least one mosque and opened fire, committing one of the worst acts of anti-Muslim violence in modern history, killing 49 people and leaving at least 40 wounded.

Brenton Tarrant apparently published a manifesto before he allegedly committed the act, which was rife with irony, references to far-right movements, and meme culture.

It also included a mention of President Donald Trump, where he said he saw the president as a symbol of “white identity.”

That a person who was about to commit a racially motivated crime considered Trump a symbol of “white identity” is newsworthy, especially because the president has often been accused of using racist and anti-Islamic sentiments to inspire acts of violence in America.

One person wants that fact not reported on: The president’s son.

“Can the media do what’s right and pass up the ratings they’ll get .. ?” he asked on Twitter.

Don’t give the POS NZ shooter what he wants. Don’t speak his name don’t show the footage. Seems that most agree on that. The questions is can the media do what’s right and pass up the ratings they’ll get by doing the opposite? I fear we all know the answer unfortunately.

And it’s a stance a lot of people thought was off the mark.

Can we publicize the fact that he cited your father and your friend, Candace Owens, as inspiration? https://t.co/hctQhOvIX8

You have nerve talking about the media exploiting violence for ratings. Watch videos of your father encouraging violence. https://t.co/YFueSFhFDg

Some noted the president’s anti-immigration 2018 midterm ads which broadcast the wishes of an illegal alien who’d committed a crime stating his desire to kill. They also broadcast the manifesto of a criminal.

Your dad's last campaign ad in 2018 was just broadcasting the unhinged courtroom rants of a murderer describing his crimes. To vilify exactly the groups of innocent people this and the Pittsburgh shooter sought to massacre.

Sit your entire ass down. https://t.co/ZjNkiM80D9

Trump Jr. is wildly wrong about how the media works. And hypocritical.

While almost everyone is in agreement on not publishing footage from the shooting, publishing a shooter’s name is a more nuanced issue. It’s not a matter the police will ever keep quiet—a suspect will be charged eventually—and is thus a matter of public record.

And in the wake of the New Zealand shooting, people want to know what happened in Christchurch. Refusing to report on that will not keep the shooter’s name from surfacing and would be a failure of any organization to not accurately explaining what happened.

Whether the screeds of people who’ve committed acts of violence are worthy of publishing is a matter of debate: Is sharing it with context useful to help people see what strains of anger run through society, or should missives of hate be buried so that they don’t inspire other people? The Daily Dot publishes summarized bullet points with context and does not publish photos of mass shooters.

It’s a difficult question that has no easy answer, but imagine a world where the flipside was enforced. In the wake of 9/11, what if no news organization posted about the motivations of an attack on New York City, and why people were inspired to commit a large-scale attack of hatred?

After all, Trump Jr. routinely shares the names of people who commit acts of violence in the name of ideology.

Because this person committed a crime that makes Trump Jr. uncomfortable instead of angry doesn’t mean it shouldn’t be covered.