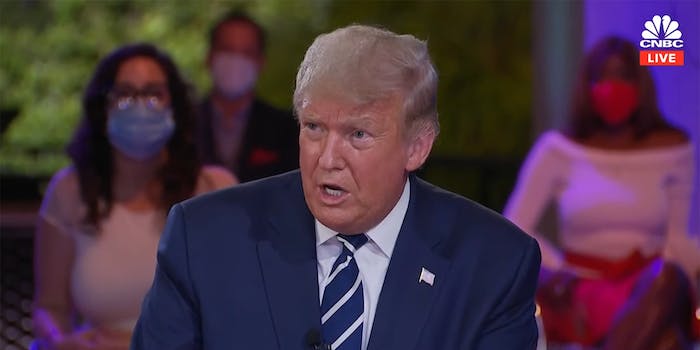 He's said this before.

President Donald Trump refused to participate in a virtual debate, so on Thursday night Americans were forced to choose between simultaneous town halls with the two presidential candidates.

In the beginning of Trump’s event, moderator Savannah Guthrie grilled Trump on coronavirus, including his recent bout with the deadly disease that has killed hundreds of thousands of Americans.

Trump first raised eyebrows by repeatedly dodging Guthrie’s question about whether he was tested on the day of the presidential debate. Then he again implied that he’d caught the virus from Gold Star families of America’s military dead. Neither went over well on the internet.

When Guthrie pressed Trump on whether he tested positive for COVID-19 on the day of the presidential debate, he claimed that he didn’t remember if he’d been tested that day.

“I probably did [get tested that day],” Trump said, then, “Possibly I did, possibly I didn’t.” He claimed he didn’t know what the results of the test might’ve been.

Trump officially tested positive for the virus two days later. Many have questioned the official timeline, in part because Trump arrived late for the debate and was taken at his word that he’d tested negative that day.

The internet wasn’t buying Trump’s claim that he doesn’t recall whether he was tested or know what the results were.

Then Guthrie brought up the large White House event announcing the nomination of Amy Coney Barrett for the Supreme Court vacancy created by the death of Justice Ruth Bader Ginsburg.

Dozens of people who attended the event, which was held the weekend before the presidential debate, subsequently tested positive for coronavirus, including Trump, White House staffers and advisers, and the first lady.

As he has previously, Trump implied that he may have instead caught the virus from Gold Star families at a different event that same weekend.

“I don’t think that’s where it was caught, but maybe it was,” Trump said.

People online were appalled that the president would try to blame the families who’ve lost loved ones in service to their country.

“There are no words,” tweeted Christina Reynolds.

“‘Dirty, infected Gold Star families may have sickened me’ is prolly not the message the undecided voter is looking for,” commented another.

The second presidential debate is scheduled for Oct. 22.