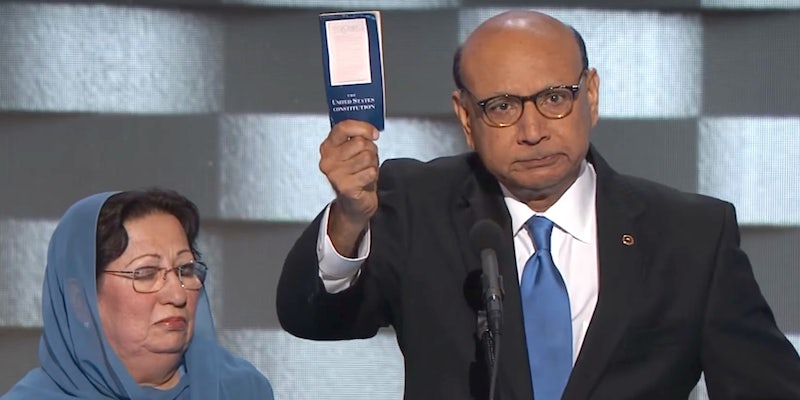 Khan canceled a speech in Canada due to uncertainty over his ability to travel abroad.

Khizr Khan, a Gold Star parent who publicly feuded with Donald Trump during the 2016 presidential campaign, has canceled a speech he was to make in Toronto because he said he was told that his “travel privileges are being reviewed,” according to CTV’s Rosa Hwang.

According to a statement by speech host Ramsay Talks that announced the cancellation, Khan, a Muslim who’s been an American citizen for more than 30 years, was told Sunday about his travel privileges. His speech in Canada this Tuesday was to focus on “tolerance, understanding, unity, and the rule of law.”

Bob Ramsay, the host of the speaker series of which Khan was supposed to attend, confirmed the cancellation on Twitter.

Said Khan in a statement released by Ramsay: “This turn of events is not just of deep concern to me but all my fellow Americans who cherish our freedom to travel abroad. I have not been given any reasons as to why.”

But Khan’s claims have raised questions about what kind of privileges he’s talking about.

Important to note: Mr. Khan hasn't said why his "travel privileges" are under review. When we reached out to him, he had no further comment.

U.S. Immigration and Customs Enforcement (ICE) referred Daily Dot questions about Khan and his self-proclaimed “travel privileges” to the U.S. Customs and Border Protection (CBP). In a statement to the Daily Dot, CBP said it does not contact travelers before they leave the United States.

“U.S. Customs & Border Protection does not contact travelers in advance of their travel out of the United States,” the agency said. “With respect to Global Entry or trusted traveler membership, CBP’s engagement is about the status of membership in the program, not any particular travel itself. Of course, any US citizen with a passport may travel without trusted traveler status.”

On Monday, Trump signed a new executive order banning the issuance of travel visas to citizens of six Muslim-majority countries. Khan—whose son, Captain Humayun Khan, was killed in 2004 during military action in Iraq—was born in Pakistan, which is not one of the six countries affected by the new travel ban.

Khan became a household name last summer when he delivered a brutal takedown of Trump at the Democratic National Convention, asking what sacrifice Trump had ever made for the U.S. and wondering if Trump had “even read the U.S. Constitution.”

Trump attacked Khan for several days after the speech went viral, and since then, Khan has spoken to law schools, Muslim organizations, and middle and high schools.

Khan also continues to be critical of Trump and his original travel ban, which was challenged by the courts.

“It’s un-American,” Khan told the New Yorker in January of the travel ban. “It’s against the safety of my country. I say to President Trump and his security advisers, the drafters of these executive orders, to get out of the White House and go to Arlington Cemetery and stand in front of all the tombstones and learn from observation that Muslims, and people from all other faiths, have given their lives to protect the Constitution and values of pluralism and equal protection. I hope that their sense of patriotism is awakened and they realize that these executive orders banning Muslims and creating walls will not do.”