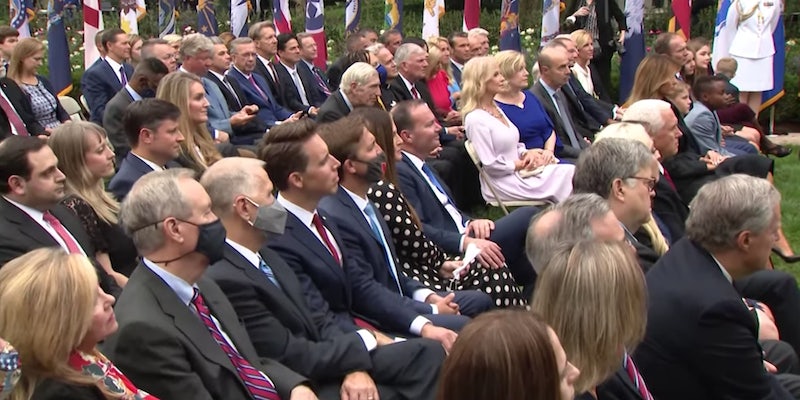 At least 8 individuals who attended the event have tested positive for COVID-19.

On Sept. 26, the president hosted more than 100 people in the White House Rose Garden where few wore masks, and even fewer practiced social distancing. Since then, numerous attendees including Trump, first lady Melania Trump, and former senior adviser Kellyanne Conway have tested positive for the coronavirus.

The suspected “superspreader event” has become a hot topic on social media and ultimately led the hashtag #RoseGardenMassacre to trend on Twitter on Saturday.

“They held a celebration event with no masks after nominating a woman who would likely try and destroy human rights and the result was a massive coronavirus outbreak amongst them. Welp,” wrote @FredTJoseph, a former campaign surrogate for Sen. Elizabeth Warren (D-Mass.) and Sen. Bernie Sanders (D-Vt).

Some took direct aim at the Republican Party, arguing that its leaders’ attempts to reopen the country have placed men, women, and children at risk.

Others accused conservatives of hypocrisy, noting the lackluster response by many to the growing death toll.

“213,543 died thanks to Trump’s malevolence: They cheered him at the Rose Garden superspreader event,” wrote Twitter user @Strandjunker.

Coronavirus memes made appearances, as well, with many poking fun at the first lady’s recent Rose Garden renovations. “I can’t help but think Melania’s Rose Garden makeover had something to do with the outbreak…” one user wrote.

Many tweets with the hashtag included reminders to wear face masks, and there were numerous references to former Vice President Joe Biden. Trump mocked Biden during the presidential debate on Tuesday for frequently wearing a mask.

“People who are questioning why all of the Republicans are getting Covid but Democrats are not, here is a handy visual,” @GermanChick85 said.

Eight people who attended the Rose Garden event have tested positive for COVID-19. Trump was taken to Walter Reed hospital on Friday after reportedly being administered supplemental oxygen earlier in the day.

While the administration has largely downplayed the president’s condition, White House chief of staff Mark Meadows told reporters on Saturday that Trump went through a “very concerning” period on Friday.