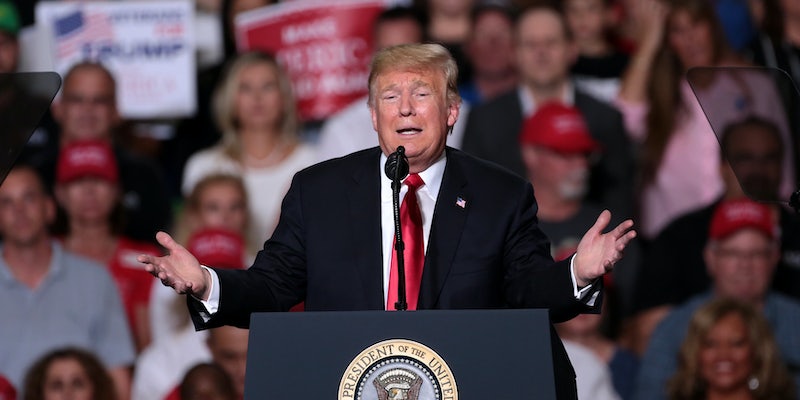 Trump made his stance known shortly after it was announced the next debate would be virtual.

President Donald Trump said he will not participate in the second 2020 presidential debate shortly after organizers announced that it would be held virtually.

The Commission on Presidential Debates announced early Thursday that the second presidential debate between Trump and former Vice President Joe Biden would be held virtually, with the candidates participating “from separate remote locations.”

The decision to change the debate to a virtual setting was to “protect the health and safety of all involved,” the commission said in a statement. The debate is scheduled for next Thursday.

Trump announced that he and First Lady Melania Trump tested positive for coronavirus last week. He was discharged from the hospital on Monday. He is supposed to be quarantined for a minimum of two weeks after a positive test. Fourteen days after his initial diagnosis would be the day of the. debate, Oct. 15.

But it doesn’t appear that Trump intends on participating in the virtual debate. During an interview on Fox Business on Thursday morning, Trump told Maria Baritomo that he would not “waste my time” with a virtual debate.

In the interview, Trump said he didn’t think he was contagious, which is a self-assessment that carries no value whatsoever.

Meanwhile, Bill Stepien, Trump’s 2020 campaign manager, blasted the Commission on Presidential Debates decision to change the format to a virtual one, saying that the commission was “unilaterally canceling an in-person debate.”

Biden’s campaign said the former vice president is participating in the virtual debate, according to CNN.

The Commission on Presidential Debates announced the change to a virtual format just hours after Sen. Kamala Harris (D-Calif.) and Vice President Mike Pence squared off during the only vice presidential debate of the election cycle.

The debate between Pence and Harris produced a number of memes and viral moments.