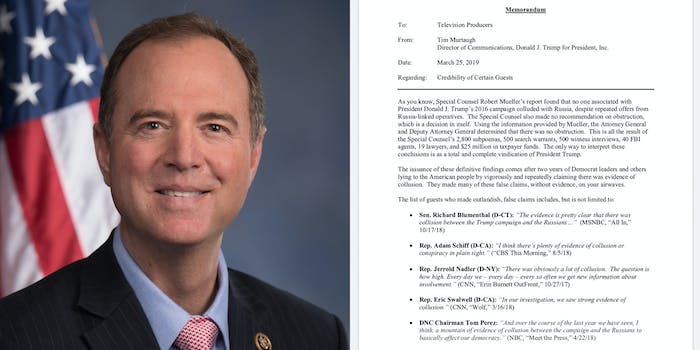 The move is a major troll by the Trump campaign.

On Sunday, Attorney General William Barr released an executive summary of Robert Mueller’s investigation into the 2016 election, which President Donald Trump and his surrogates used to absolve themselves of any wrongdoing.

While it explicitly says it “does not exonerate the president,” the summary said Mueller didn’t find sufficient evidence to prove collusion between the Trump campaign and Russia. As part of its victory lap, the Trump 2020 campaign is going after anyone who pushed that narrative.

In a letter to television networks, Trump’s reelection campaign provided a list of guests cable shows had one who pushed “outlandish, false claims” who networks should rethink having on air.

The Trump campaign is sending this memo to TV producers: pic.twitter.com/yhr03LAI7N

The list includes major figures in the Democratic party, like Rep. Adam Schiff (D-Calif.), Rep. Jerrold Nadler (D-N.Y.), and Rep. Eric Swalwell, highlighting some of the quotes they gave on TV.

The campaign asks that networks rethink booking guests, asking “does this guest warrant further appearances,” given what was in the Barr summary.

In the letter, the campaign asked that if they do have them back on TV, that networks “should replay the prior statements and challenge them to provide the evidence which prompted them to make the wild claims in the first place.”

In another world, a campaign for an executive telling independent networks what guests they could have on air would be considered a warning sign of a creeping authoritarian state, but here it’s just Tuesday.