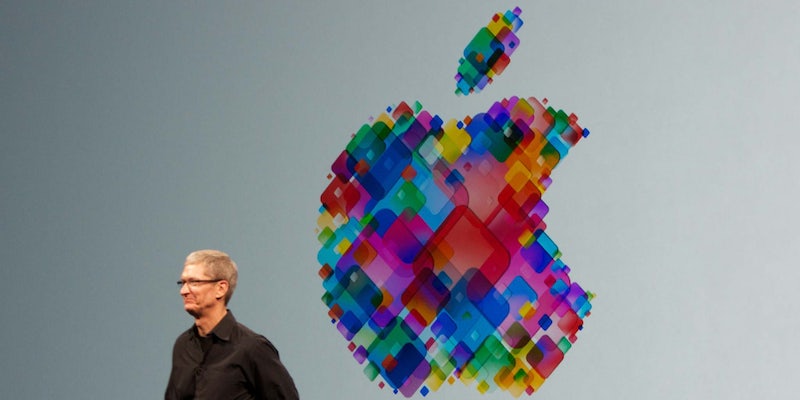 Apple’s Tim Cook warns the FBI not to weaken encryption

The most powerful tech CEO in American sides with strong encryption.

The new crypto wars continued to ramp up this week as Apple CEO Tim Cook doubled down on the need for strong encryption in a speech in Washington, D.C., on Monday night.

Cook pushed back against a campaign led in part by FBI director James Comey to require adding backdoors—intentional weaknesses in the encryption code—for law enforcement  to encryption technology, such as the encryption used in Apple’s iPhone devices, Politico reports.

Echoing warnings from technical experts across the world, Cook said that adding encryption backdoors for law enforcement would weaken the security of all devices and “is incredibly dangerous.”

The audience at the Electronic Privacy Information Center awards dinner, which was honoring a variety of privacy experts and activists, reportedly responded warmly to Cook’s words.

“So let me be crystal clear: Weakening encryption or taking it away harms good people who are using it for the right reason,” he said.

Cook, who has been CEO of Apple for nearly four years now, has placed himself on the front lines of the new crypto war, first by announcing new and strong encryption options for Apple products and then repeatedly debating figures like Comey as they push for the legal dismantling of strong encryption.

Standing shoulder to shoulder with Cook in the new crypto war are Reps. Ted Lieu (D-Calif.) and Will Hurd (R-Texas), both members of the Information Technology Subcommittee in the House of Representatives.

Lieu, who has made headlines on this issue before, teamed up with Hurd in a letter sent to Comey on Monday that echoes many of Cook’s points.

The pair laid out three reasons they had for disagreeing with Comey’s campaign.

First, forcing American companies to weaken encryption would fundamentally change the relationship between government, the private sector, and citizens for the worse. How could you trust Apple to protect your privacy if its primary privacy tool is broken?

Second, any intentional backdoor meant for law enforcement can also be accessed by hackers. “It is important to remember that computer code and encryption algorithms are neutral and have no idea if they’re being accessed by an FBI agent, a terrorist, or a hacker,” the congressmen wrote.

Third, mandatory backdoors can be circumvented by anyone by avoiding American-made products.

Although debate over the USA Patriot Act and the bill mean to reform it, the USA Freedom Act, currently dominate attention in congress, it’s clear that the increasingly loud debate over encryption is soon going to gain a far brighter spotlight as both the FBI and technology sectors continue to clash.