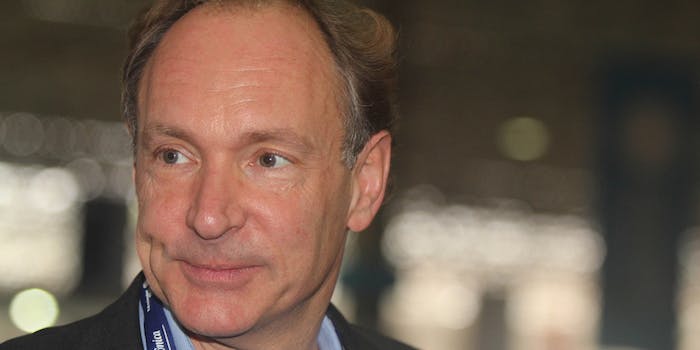 That would have been... weird.

It’s 1989 and the man who was about to invent the World Wide Web has no idea what to call it. Tim Berners-Lee is stuck between four choices for his tool that would change the world, he revealed in a recent Reddit AMA.

Here are the three that thankfully got moved to the trash bin of history:

– Mine of Information (MOI, the French word for “I”)

The first two were too egotistical, Berners-Lee said. And “Mesh” thrown out because it sounded too much like “mess.”

Only World Wide Web had the right ring, he told Reddit earlier today. That’s partly because he could “start global variable names with a W and not have them clash with other peoples’.”

The rest of the question and answer session was fascinating in its own right. Many users asked about the future of the Web and whether or not freedom and neutrality will go the way of the dinosaurs.

“I think it is up to us,” he wrote. “Yes, I can imagine that all too easily. If ordinary web users are not sufficiently aware of threats and get involved and if necessary take to the streets like for SOPA and PIPA and ACTA. On balance? I am optimistic.”

Above all else, Berners-Lee has been most surprised by one specific use of the Web that he never saw coming: “Kittens.”