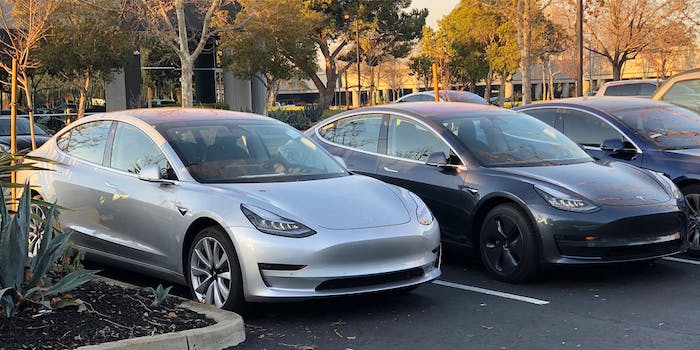 Tesla’s Smart Summon feature is off to a rough start

Several fender benders and near misses have already been reported.

Electric vehicle maker Tesla released its “Smart Summon” feature last week and things appear to be off to a rough start.

The feature, which made its way to Tesla vehicles as part of the Version 10 software update, allows users to summon their vehicles to pick them up when in a parking lot.

Where have you parked your Tesla?

But also, who cares?

Our Smart Summon feature means your car collects *you* from the parking lot. pic.twitter.com/boEtjJlY1V

Tesla has stressed to users that it is their job to watch their vehicle during the Smart Summon process to ensure that it is operating safely.

“Make sure you have a clear line of sight to your car and have checked its surroundings,” a video tweeted by Tesla says. “Your Tesla will maneuver around or stop for objects, and notify you when detected. Remember that it’s the driver’s responsibility to use Smart Summon safely.”

But judging by a wave of new posts showcasing the feature on Twitter, it appears Smart Summon isn’t always summoning all that smoothly.

One user who says he attempted to use the feature in his own driveway ended up with a damaged vehicle after his Tesla allegedly drove into his garage.

Be forewarned @Tesla @elonmusk Enhanced summon isn’t safe or production ready. Tried in my empty drive way. Car went forward and ran into the side of garage. Love the car but saddened. #Tesla #TeslaModel3 pic.twitter.com/tRZ88DmXAW

Although many people in the replies questioned the validity of the claim, videos of Smart Summon causing cars to move sideways have also been uploaded to Twitter.

One Tesla owner seen summoning his Model 3 can be heard panicking when another car suddenly backs out of a parking spot, causing the two vehicles to collide.

Many have argued that such a crash could have been avoided by a human driver, who would have seen the other vehicle reversing.

Not all videos have ended in disaster though. One user was able to stop his Tesla just in time before an SUV barreled into its driver-side door.

One video even shows a man chasing down a Tesla after appearing to think that the vehicle’s parking break had broken and begun rolling away.

Despite the potential for disaster, many seem to trust the feature enough to put children and animals in their vehicles unattended.

DROP OFF: Could be the future of kids going to school. New @Tesla software update is impressive. #Tesla #Summon #driverless #SmartSummon #teslamodel3 pic.twitter.com/gKCVvCXXXE

Tesla has also stressed that Smart Summon is in beta, although users don’t seem too worried either way. Welcome to the future.