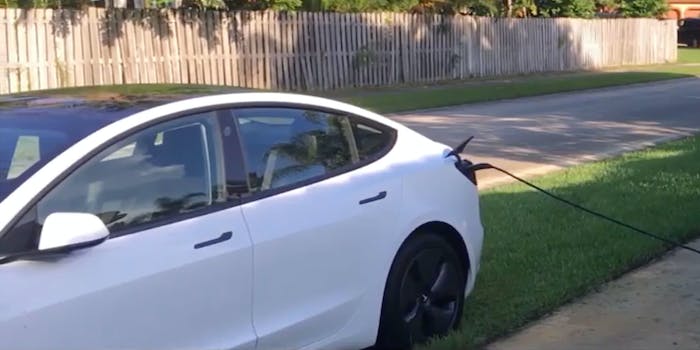 Police arrived after the vehicle had been siphoning electricity for 12 hours.

A Florida man woke up to discover a Tesla parked on his lawn Friday morning that was plugged into his home and stealing electricity.

Lake Worth resident Phil Fraumeni recalled to WPBF how a lawn care worker knocked on his door early that morning to alert him to the vehicle. Fraumeni stepped outside to see a white Tesla not only parked on his grass but a long extension cord running from the car to his home.

“It was plugged into my electric outlet on my house,” Fraumeni said.

The Florida native waited several hours for the owners to return and eventually called police when they didn’t show.

After confirming the car hadn’t been stolen, police were able to locate the address of the vehicle’s owner. Not long after, Fraumeni says a young man and woman arrived at his home to claim the Tesla.

The pair admitted that the vehicle had run out of power late Thursday evening while visiting a friend in the neighborhood. Instead of knocking on Fraumeni’s door to ask for help, the couple took it upon themselves to park on his lawn, steal his electricity, and leave.

Fraumeni says the young man told him that the Tesla had been charging since midnight, meaning the car had been left on the lawn for more than 12 hours.

Although Fraumeni opted not to press charges, his wife, who wasn’t at home during the incident, was much less forgiving. In a Facebook post, the man’s wife said the car owner never apologized or offered to make things right.

“He is lucky I was out of town and my husband was home because I would have insisted on restitution,” the woman wrote.

While Jalopnik estimates that the cost in electricity would have been around $2.07, the fact that the Tesla owner seemingly saw no issue with trespassing and stealing electricity is troubling to say the least.

Fraumeni says his only problem is that his neighbors won’t stop trolling him by asking for free electricity.