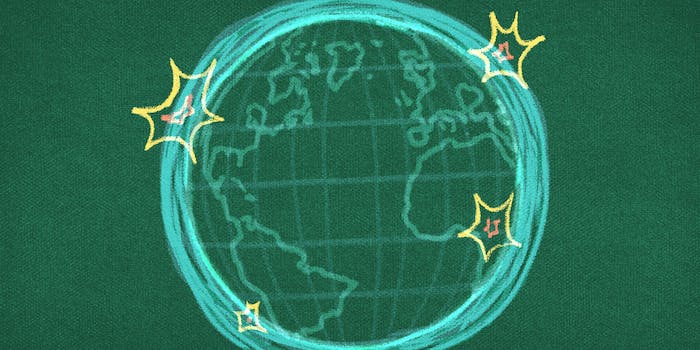 T-Mobile is throttling your video streams and downloads, test finds

According to a series of tests conducted by the EFF, T-Mobile appears to be throttling video.

T-Mobile customers, it’s not just in your head—your mobile connection may really be a lot slower than it’s supposed to be.

That’s the message from the Electronic Frontier Foundation, which recently found that the wireless service provider is “throttling” customers’ connections when they stream or download videos, and they’re doing it under the guise of “optimized” service.

Late last year, T-Mobile launched a new service called Binge On, which allows customers to watch videos from YouTube and other services on their mobile devices without it counting against their data plans.

T-Mobile “optimizes” video from participating providers, which includes Netflix, Hulu, HBO Now, ESPN, to a 480p bitrate—about the quality of a DVD. According to recent tests by the EFF, however, T-Mobile is not optimizing the video streams at all and is instead simply limiting users’ mobile bandwidth to 1.5Mbps—far slower than your average LTE connection. Also, the EFF found, the throttling occurs when customers stream or download any video—not just those from participating partners.

The EFF conducted the tests by uploading video to their servers, and then trying to download or stream the video in a variety of ways. All of the phones were tested about the same time of day, all had Binge On enabled, and all took place over strong 4G LTE connection.

According to EFF’s results, T-Mobile “throttles all HTML5 video streams to around 1.5Mps, even when the phone is capable of downloading at higher speeds, and regardless of whether or not the video provider enrolled in Binge On.” The study effectively confirms what has been frustrating customers for months. 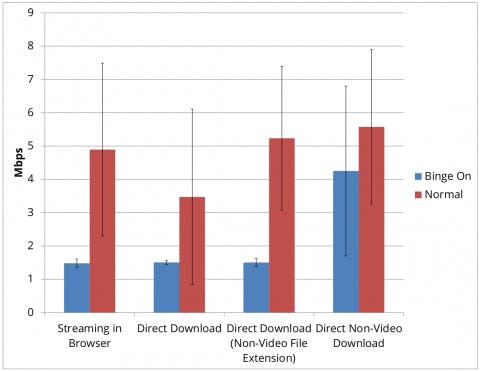 The EFF’s findings comes after T-Mobile claimed that it wasn’t “throttling” data, but merely “optimizing” it. A company spokesperson told DSL Reports, “A less flattering ‘downgraded’ is also accurate.”

T-Mobile did not immediately respond to our request for comment.

Throttling, downgraded, optimized—why does the name for what T-Mobile is doing matter? Because “throttling” is forbidden by federal rules.

The Federal Communications Commission’s net neutrality rules, passed in February 2015, mandate that broadband providers “may not deliberately target some lawful Internet traffic to be delivered to users more slowly than other traffic,” according to the FCC.

Last June, the FCC hit AT&T with a $100 million fine for misleading customers about their “unlimited” data plans. For customers with those plans, the FCC found, AT&T was throttling their connections to far lower speeds than normal.

The EFF has called on the FCC to investigate its finding.

“The net neutrality rules aren’t just words on a piece of paper—they’re regulations meant to protect Internet users from precisely this sort of abuse of power by ISPs,” EFF said. “We believe the FCC should regulate lightly, but our research suggests this is a significant consumer harm that runs afoul of well-established open Internet principles. The FCC can and should step in and hold T-Mobile accountable.”

At the FCC’s November meeting, after concerns about T-Mobile’s possible net neutrality violations first surfaced, Chairman Tom Wheeler praised Binge On as “highly innovative and highly competitive,” but he indicated that the commission would continue to watch how the company implemented the plan.

“What we’re going to be doing is watching the Binge On product,” Wheeler said, according to Recode. “Keeping an eye on it to measure it against the general conduct rule.”