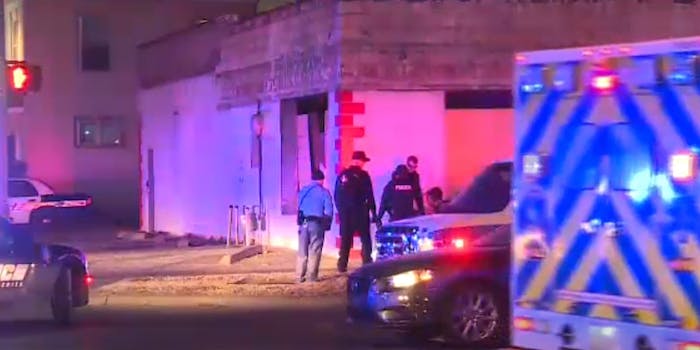 The three men involved in a “swatting” prank call that led to the death of a Kansas man were indicted earlier this week by a federal grand jury on multiple charges.

The 28-year-old victim, Andrew Finch, was shot by police after one of the defendants, Tyler Barriss, 25, placed a hoax call to the police informing them of a made-up hostage situation. Casey Viner, 18, allegedly instigated the incident during a dispute with Shane Gaskill, 19, over the popular video game Call of Duty: World War II.

When the argument boiled over, Viner urged Barriss, who had a history of conducting similar stunts, to “swat” Gaskill. Barriss, who went under the alias “SWAuTistic,” had bragged about swatting hundreds of schools and dozens of residents.

Swatting is the practice of making false reports about serious crimes like a bomb threat or murder so authorities send police to a certain location.

Gaskill wasn’t impressed with Viner’s threats and allegedly told Barriss that he was at 1033 McCormick in Wichita, an old address his family once lived in.

Shortly after the dispute between Viner and Gaskill, Barriss called 911 and told a dispatcher that he had killed his father, was holding his mother and brother hostage at gunpoint, and had doused the house with gasoline and was thinking about setting it on fire. He said he and his father “were arguing, and I shot him in the head, and he’s not breathing anymore.”

When the dispatcher asked for his home address, he gave them the false address Gaskill had provided, where Finch lived.

Several police officers were dispatched to the home. Finch, who had nothing to do with the argument, was shot and killed by police as he stepped out onto the front porch. This is the first reported death caused by swatting.

When Gaskill learned about what happened at his old address, he urged Barriss and Viner to cover their tracks.

“Dude, me you and bape [Viner] need to delete everything,” he said in a message to Barriss. “This is a murder case now. Casey deleted everything. You need 2 as well. If you don’t you’re literally retarded I’m trying to help you both out. They know it was a swat call.”

Instead, Barriss, using his @SWAuTistic persona, posted about the incident on social media and tweeted that he didn’t get anyone killed because he didn’t pull the trigger. He also confessed to the fatal swatting call to KrebsonSecurity and YouTuber Keemstar but didn’t give away his identity.

“I was minding my own business at the library when someone contacted me and said ‘Hey dude, this fuckin’ retard just gave me his address and he thinks nothing’s gonna happen. You wanna prove him wrong?’” Swautistic explained.

The three men were charged with multiple crimes related to the incident. Charges against Barriss include making false or hoax reports to emergency services, cyberstalking, wire fraud, and making interstate threats. Both Gaskill and Viner are charged with wire fraud, conspiracy to obstruct justice, and obstruction of justice.

Cyberstalking and making a false or hoax report to emergency services resulting in death are offenses punishable by a sentence of up to life in prison. Obstruction of justice has a maximum penalty of 20 years in prison. Each charge also carries a $250,000 fine if the men are convicted.

The officer who fired the deadly bullet will likely not face charges. He thought he saw Finch reaching for his waistband and believed he was pulling out a weapon. Finch’s family sued the city and officers for unspecified damages.

“They didn’t knock on the door. My son opened it because he heard something. He screamed and then they shot him,” Lisa Finch, Andrew’s mother said.