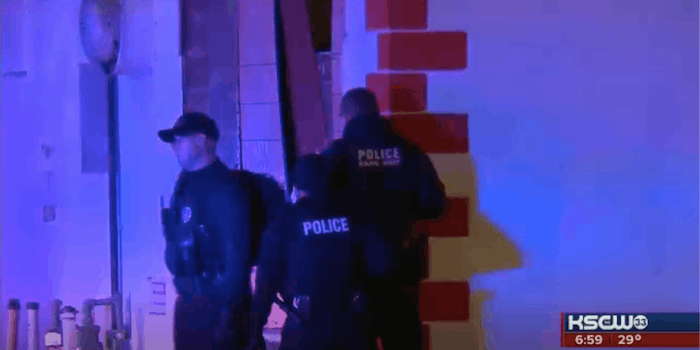 A man known as Swautistic has claimed responsibility for the false homicide report that resulted in a fatal shooting Thursday night.

A 28-year-old man was shot by police in Wichita, Kansas, Thursday night after someone called in a false homicide report at his address. On Friday, the man who claims to have placed the call gave an interview on a popular YouTube channel.

The story that’s being passed around online—but has not yet been confirmed by police—is that the 911 call was placed as part of a feud between two players of the online first-person shooter game Call of Duty. One of the parties involved wanted to “swat” the other—meaning to send police to his house as a prank—but he didn’t want to place the call himself. Instead, he contacted someone called “Swautistic,” who had previously bragged about swatting players and even shutting down major gaming events by calling in threats.

But the target apparently gave Swautistic a false address, and that’s where police showed up. An officer shot and killed Andrew Finch, 28, who didn’t play video games and appears to have been completely unrelated to the dispute.

On Friday, Swautistic gave an interview to YouTuber Keemstar, who has earned millions of subscribers by covering “drama” among online stars like Jake Paul and Danielle “Bhad Bhabie” Bregoli.

In the course of their 10-minute conversation, Swautistic didn’t give any personally identifying information, other than to say that he’s over 18 years old and “doesn’t have parents.”

“I was minding my own business at the library when someone contacted me and said ‘Hey dude, this fuckin’ retard just gave me his address and he thinks nothing’s gonna happen. You wanna prove him wrong?'” Swautistic explained.

“And I said, ‘Sure, I love swatting kids who think that nothing’s gonna happen.'”

He said the target then contacted him on Twitter, dared him to do something, and gave him an address.

He admits he called the police and created what Keemstar called “a fake hostage situation.” While it has yet to be confirmed, his voice at least sounds similar to the 911 audio Wichita police shared at their press conference earlier in the day.

“And then this guy gets killed,” Keemstar said.

Although he claims he placed the call, Swautistic doesn’t believe he’s at fault because he was “almost instructed and taunted” into trying to swat the address.

Swautistic also admitted to writing a tweet that made the rounds of the Call of Duty community on Friday in which he claimed, “I DIDN’T GET ANYONE KILLED BECAUSE I DIDN’T DISCHARGE A WEAPON AND BEING A SWAT MEMBER ISN’T MY PROFESSION.”

Throughout the interview, Swautistic attempted to shift the blame to the person who duped him with the wrong address.

Swautistic also admitted to previous swattings, including evacuating a Major League Gaming event in Dallas earlier this year. He said sometimes he swatted for money, but sometimes he just targeted events “for fun, just to get it on TV.”

“I don’t really swat people,” he said, noting that the risk of being caught is much lower for evacuations than for swatting an individual’s home.

Although the Wichita police and federal authorities are investigating the false call, Swautistic didn’t seem to have much fear that his arrest was imminent.

“Worried, yeah? But currently, not so much,” he told Keemstar.

“It’s my personal belief that I didn’t cause someone to die. I guess. If I could rewind I fucking would, ’cause this is all stupid.”

Update 2:39pm CT: According to NBC News and the Associated Press, a 25-year-old man named Tyler Barriss has been arrested in Los Angeles. Barriss allegedly made the false report after getting into the dispute, and according to police, Barriss is the one who gave authorities the fake address.