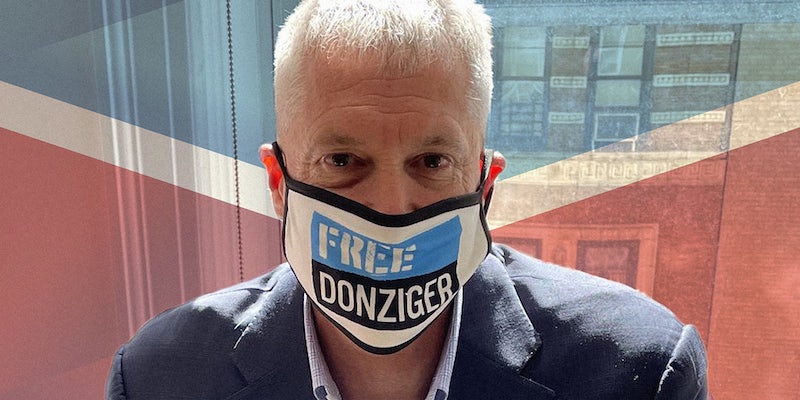 It's using every tool it has.

Steven Donziger, paradoxically, is right now both a relatively unknown figure and one of the most reviled men in the United States. At least by big petroleum corporations. For those unfamiliar with his saga, it involves a massive, decades-long legal battle between Chevron and indigenous activists in Ecuador.

And Chevron is using its powerful PR machine to smear Donziger, with the help of Google ads.

To make a long story short: In the early 1990s, Ecuadorian group Frente de Defensa de la Amazonía (Amazon Defense Coalition) reached out to attorney Steven Donziger to try to win compensation for extensive oil pollution in the country. Donziger brought a class-action lawsuit against oil company Texaco (later bought by Chevron) on behalf of more than 30,000 farmers and indigenous people from the Amazon, set to be tried in New York. Chevron argued they were not responsible for clearing the pollution and requested that the case be tried in Ecuador instead. Chevron was still found guilty in 2011 by an Ecuadorian court and fined $9.5 billion. But the company quickly moved its assets out of the country, leaving the farmers and indigenous groups who won the lawsuit with nothing. Chevron then filed a RICO suit against Donziger, accusing him of bribing an Ecuadorian judge and fixing scientific studies. Multiple trials and appeals have proceeded over the years.

Because of a convoluted way Chevron found to fight against Donziger, he’s currently under house arrest, despite being a lawyer only facing a misdemeanor charge. And he’s been locked up in his home for more than a year.

Donziger’s next trial is set to take place in May 2021, so the saga is bck in the cultural consciousness.

But the fight seems to have taken a somewhat dirty turn in recent days. Google searches for “Steven Donziger” yield ads that redirect to Chevron’s website, to a press release filled with claims that Donziger has a “campaign to profit from the fraudulent Ecuadorian lawsuit.”

Donziger has become a grassroots hero, with significant online support across the world despite Chevron’s efforts to smear him in court, Now, the company is using subtle web tactics and a bit of money to try and obfuscate the narrative.

Terms across the case searched on Google reveal sponsored ads by Chevron, trying to bump down articles that are more favorable and sympathetic to Donziger.

For a company as big as Chevron, the money spent on ads is likely a piddling amount. But Donziger is enough of a thorn in its side that it appears to be worth it.

But the campaign isn’t just limited to Google. It’s also using public relations wires to help push its story, as well as an actual sock puppet Twitter account from their PR head.

Searching key phrases and wording present in a recent press release, such as “an end to his campaign to profit from the fraudulent Ecuadorian lawsuit” yield multiple press releases sent through BusinessWire and re-posted nearly word for word on news sites like Yahoo and NASDAQ.com

Donziger sold shares in the settlement with Chevron to help raise money for his current legal tribulations, which a judge recently barred him from doing. It was a victory Chevron was happy to tout and blast across the web, flooding results of a minimally covered story with the news of Donziger’s loss in court.

The initial BusinessWire press release includes contact information for Sean Comey, who appears to be a Senior Advisor at Chevron and who previously worked as a reporter at multiple CBS affiliates. Most of his work focuses on maintaining Chevron’s reputation globally, listing multiple YouTube videos about why fossil fuel industry jobs are key in the United States.

A Twitter search for Sean Comey yields a Twitter account with his name and a literal “sock puppet” avatar, implying the account is for artificially inflating engagement. A review of his liked Tweets shows extensive engagement with articles in The Amazon Post and Washington Examiner that frame Steven Donziger in an unflattering light. The account has interacted with and boosted these tweets since 2018.

While there’s nothing particularly suspicious about a Chevron PR executive working to portray the activist who sued Chevron as a villain, it does serve as a reminder that it’s very easy for corporations to pay for advertising and even promotional placement in news outlets. Modern readers need to be more vigilant than ever to make sure they know where the information they read is coming from—because if they’re not, they very well may fall for fossil fuel PR framed to look like objective news.