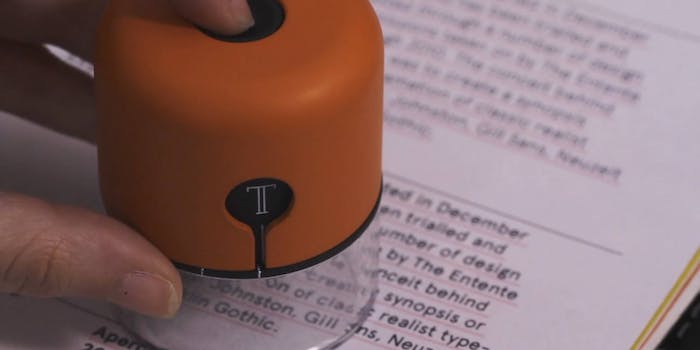 This ridiculous gadget can identify fonts just by looking at them

Ever find yourself looking at a poster, a billboard, or someone’s graphic tee and falling in love with the typography? If you’re looking at wedding invite pegs and are struggling to identify the fonts used, thanks to a gadget prototype, you can easily figure out exactly what the typefaces are.

Spector is the brainchild and graduation project of Fiona O’Leary, a student at the Royal College of Art in the U.K. Not only is it designed to capture fonts and recognize them, it can also detect colors. It then transfers everything it collects directly into InDesign.

How does it work? Depressing the button on the Spector as it hovers over a piece of media you’d like to capture activates a camera within the gadget. Using the sample taken, an algorithm breaks the image down into data that detects shape and color in CMYK/RGB values. That data is then sent to a font and color database, where the sample is further identified.

Using a plugin installed into a nearby computer, Spector then sends all the font and color information directly into InDesign, where you can modify highlighted text to the typeface or color of your sample in real life. If your computer is elsewhere, Spector can store a maximum of 20 font samples for transfer at a later time.

At the moment, O’Leary’s prototype can detect only seven fonts accessed through a database, but she is working on integrating it with a larger collection of typefaces.

Despite its potential to aid in creative piracy and plagiarism, Spector is definitely a cool thing to have, if only for amassing design inspiration. After all, a single idea is rarely original, especially in the time of the Internet.

Graphic designers and font fanatics alike may find such a device to be a must-have ASAP. Unfortunately, it’s still in its concept phase of development.