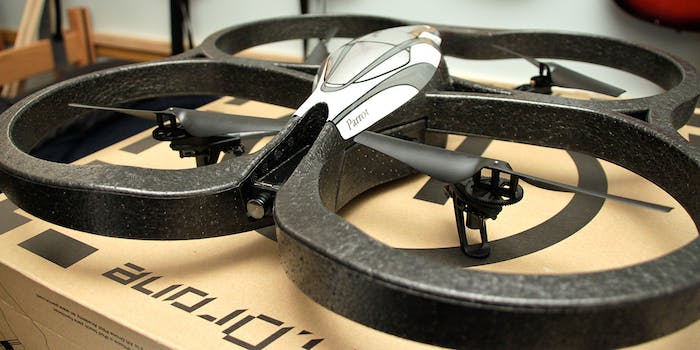 'Prepare for the drone apocalypse!'

Drones can be amazing tools for creating videos and conducting search-and-rescue missions. But as drones become more popular, people are starting to do dumber things with them—like flying them near airplanes and decking them out with guns.

Enter Snake River Shooting Products, an Idaho company that has manufactured ammunition for shooting drones out of the sky. “The rounds are a 12 gauge 3″ shot shell solution aimed at defending against drone-based privacy concerns and terror!” the company announced in a press release. (Translation: These shells are standard 12-gauge birdshot, except there are pictures of drones on the box.)

Even though the Snake River shells appear to be just birdshot—the company acknowledges that “the round makes for a very high end hunting load for ducks, geese or turkeys”—advertising them for drone hunting is a fun gimmick. The boxes caution against “the invasion of privacy” and tell customers to “prepare for the drone apocalypse!”

“Drone Munition was created to provide defense against the danger caused when drones are misused,” the company explained. “Drone Munition is lead free, safe for the environment and provides a very high quality load that will effectively disable a drone encroaching your property’s airspace.”

However, as much as you may be tempted to shoot down your neighbor’s drone, be warned—it’s probably not legal to do so. You’ll be safer shooting at flying animals than flying robots.