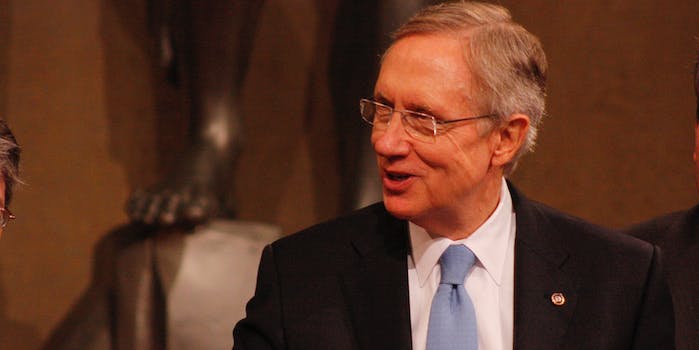 This simple vine gets to the root of the government shutdown

If only all of Congress could be this competent. At anything.

As the United States government furlough drags on, members of Congress are becoming more and more eager to stress their viewpoints to voters.

Enter Sen. Harry Reid (D-Nev.), who Tuesday published one of the most amazingly competent Vines in U.S. political history.

At the Vine’s heart is Reid’s complaint that when Senate Democrats want to conference a budget compromise, they’re shut down by Republicans. This seems to contradict congressional Republicans’ stance that the shutdown isn’t about preventing the Affordable Health Care Act at all costs; it’s about forcing a budget compromise.

But Reid—or, perhaps more likely, someone on his staff—deployed Vine’s strength of quick cuts and showed nine different Republicans saying “I object,” supposedly all at Democrat-led Senate proposals to talk budget.

“I thought Republicans wanted to negotiate. But this is what happens every time Democrats ask for a budget conference,” Reid (or his staffer) wrote.

If only all of Congress was as good at Vine as Reid. This shutdown wouldn’t have lasted a day.