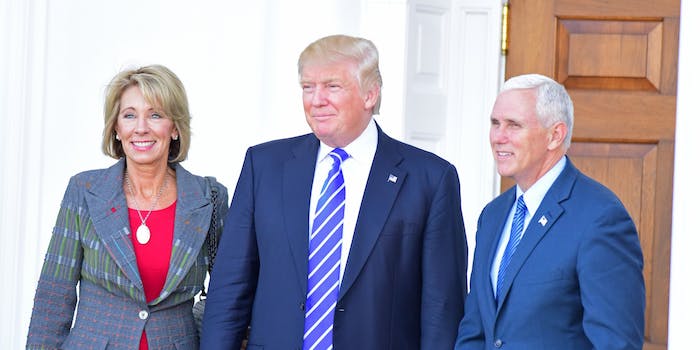 In a historic 51-50 vote that required Vice President Mike Pence to break the tie, the Senate on Tuesday narrowly confirmed Betsy DeVos as the new secretary of education.

All 46 Democratic senators and two independent senators voted against DeVos, a billionaire mega-donor to Republican causes and a staunch advocate for charter schools and school choice.

DeVos is the first of President Donald Trump‘s cabinet nominees to encounter Republican opposition, with Sens. Lisa Murkowski (R-Alaska) and Sens. Susan Collins (R-Maine) voting in opposition due to what they said were DeVos’ inexperience with public schools and her career advocacy of private charter schools.

The education secretary is largely a non-controversial pick and all have been confirmed with bipartisan support. More senators voted in opposition to DeVos than all previous Education secretaries combined.

DeVos has the support of neither senator from her home state of Michigan nor the Michigan Education Association.

DeVos is also opposed by teachers unions and the National Education Association, signaling a tough fight ahead for her agenda as she signaled that she would largely leave the controversial issue of school vouchers left to the states.

Randi Weingarten of the American Federation of Teachers swore that the coalition that united in opposition to DeVos would not falter.

As #DeVos is confirmed by Pence vote,the public in public edu has never been more visible or more vocal&it's not going back in the shadows

Democrats railed against DeVos’ confirmation over concerns about her conflicts of interest related to her financial holdings, her initial lack of transparency, her lack of experience, and her apparent hostility toward public education. DeVos is the first Cabinet nominee in history to need the vice president as a tie-breaker. This is due to a procedural move invoked by former Senate Majority Leader Harry Reid (D-Nev.) that lowered the threshold for executive nominees to a simple majority, instead of 60 votes.