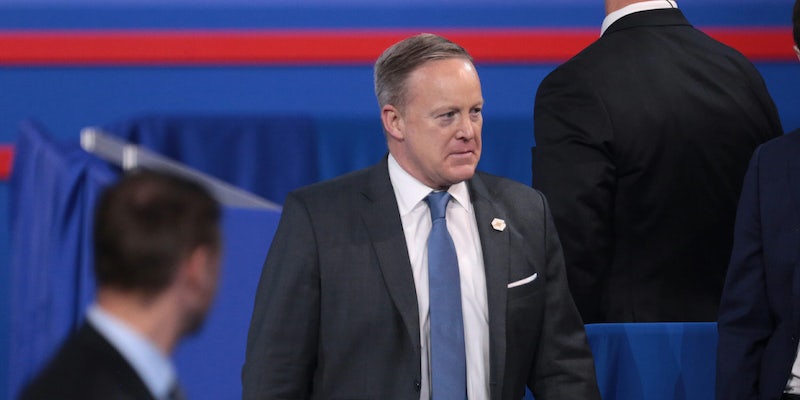 'When I screwed up, yeah, it felt really bad.'

Former White House Press Secretary Sean Spicer said there were times where he “screwed up” while serving under President Donald Trump last year.

Spicer spoke with HLN on Thursday and said there was “no question” that he “screwed up” at times during his time as press secretary, which infamously kicked off with him asserting that Trump’s inauguration crowd was the largest ever despite photographic evidence showing that the claim was false.

“What I said is ‘the largest audience to ever witness an inauguration in person or around the globe,’” he said. “The fact of the matter is that there are platforms like Twitter and Facebook and Instagram that were not available in previous administrations… What I do regret is that we didn’t emphasize those points enough. We focused too much on the pictures.”

Spicer also said he had regrets over his complete fumbling of a defense of Trump ordering an airstrike on a Syrian government facility by claiming the country’s dictator Bashar al-Assad used chemical weapons on his own people. In the defense, Spicer said Nazi leader Adolf Hitler “didn’t even sink to using chemical weapons,” which, of course, is false.

“I screwed that up royally,” Spicer said, later adding: “When I screwed up, yeah, it felt really bad.”

Spicer said his missteps in office tarnished his reputation, his family’s reputation, and that of colleagues.

He also said he took the job as press secretary thinking it would be “traditional,” a view he quickly changed.

“I went into that job thinking about the job as a traditional press secretary,” he said. “It’s an untraditional president… He’s a disrupter, he is a street fighter, he won because he presented a different way of doing business and coming and shaking up Washington. I think from the get-go one of the lessons that I learned is that we needed to look at who the president was and the message he sending and say we need to adapt to the style he is coming in.”

Spicer announced his resignation from the Trump administration after Anthony Scaramucci was named Communications director.

You can watch all of the former press secretary’s interview here.