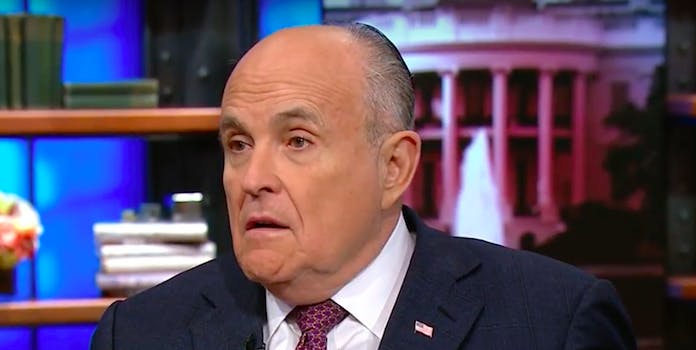 President Donald Trump‘s own lawyer said his client is not immune from charges of obstructing justice during an interview on CNN, contradicting the case Trump’s former lawyer John Dowd has made, according to the Washington Post.

While on air with CNN’s Chris Cuomo, Rudy Giuliani made a pretty big mistake for his client while in the process of arguing that Trump has the power and discretion to fire anyone he wants.

GIULIANI: The president has complete discretion to fire anybody he wants.

CUOMO: What about corrupt intent?

GIULIANI: There’s no evidence of that.

CUOMO: You don’t think a president can obstruct justice?

GIULIANI: He can. But I think in the case of firing a subordinate who’s going to be replaced by somebody else on an acting basis immediately —

CUOMO: But it’s why you fired them. Corrupt intent. It’s part of the legal analysis.

As the Washington Post pointed out, the question of whether Trump obstructed justice only comes into play legally if special counsel Robert Mueller attempts to charge Trump with a crime—which is unlikely. It could, however, contribute as a factor if Congress has to decide whether Trump committed an offense worthy of impeachment down the road.

That’s probably why Dowd told Axios back in December that the president cannot obstruct justice because he is the chief law enforcement officer under the Constitution’s Article II and therefore has “every right to express his view of any case.”

In the same interview, Giuliani also became very flustered when Cuomo pointed out that his belief that Trump cannot be subpoenaed to sit in front of a grand jury is at odds with an interview he gave in 1998 with Charlie Rose about Bill Clinton.

In the 1998 interview, Giuliani argued in favor of Clinton’s subpoena. Now, he has defended Trump and said that while it’s appropriate for the special counsel to subpoena for papers, they cannot ask Trump to sit in front of a grand jury.

Giuliani also said Friday on CNN that Mueller has agreed to narrow the scope of a potential interview with Trump from five topics to two. He does not plan to ask Trump about his former personal attorney Michael Cohen, but will instead remain focused on Russia.