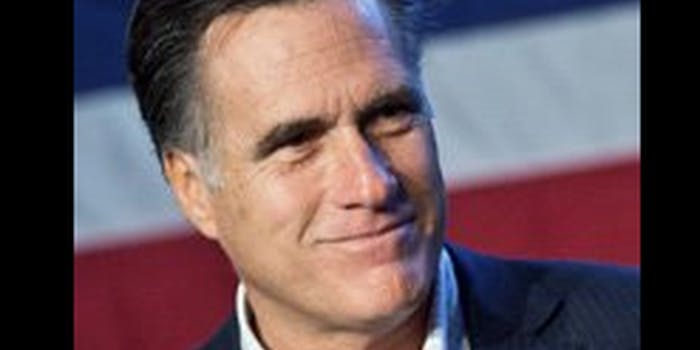 Can you resist Romney the friendly robot?

The Daily Show created this Tumblr so Romney's tweets could be experienced as originally intended.

Consider Mitt Romney’s solid looks, lack of emotion, and even-tempered charisma: Are you sure he’s not a robot? Can’t decide? Read his tweets and your suspicions will be confirmed.

The Daily Show created R.O.M.N.E.Y. 140, a single-serve Tumblr that reproduces Romney’s tweets in what we can only assume is Romney’s true speaking voice: a computer’s. The text-to-speech function on your computer has finally found a purpose! The blog started a week ago, but the posts have not collected many likes or reblogs.

Just like his public appearances, Romney’s tweets play it safe and express only plastic, shrink-wrapped emotions. A tweet like “Ann joins me in wishing everyone sitting down for a Passover Seder a joyous time with family and friends,” sounds frankly sounds much more natural when it’s read by a computer.

Other amusing tweets include listening to the computer stumble over a clunky Romney tweet that includes an even clunkier hashtag (#ObamaIsntWorking). You can really sense the computer’s confusion as Romney begrudgingly gives praise to Barack Obama in another tweet.

As it says in the description of the Tumblr: “His voice is real. But he is not.” The Daily Dot cannot confirm that the candidate has seen this Tumblr, but it’s lucky Romney has no emotion—if he had, he’d be very ambivalent toward it.