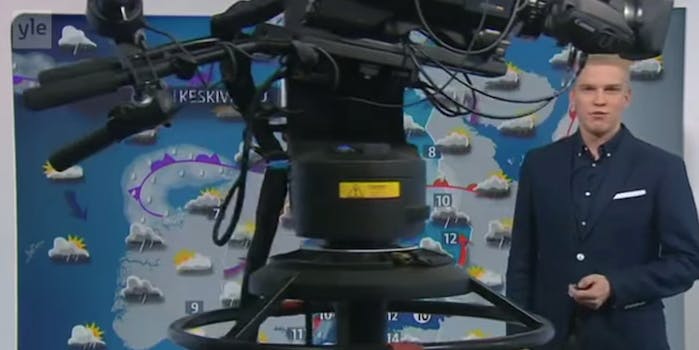 The anchor doesn't seem to mind one bit.

Robots are disrupting our workplace in many ways. In some cases, they’re taking manufacturing jobs. But in the case of Finland’s YLE public news station, a robot physically disrupted the newsroom.

A robotic television camera interrupted meteorologist Toni Hellinen as he was giving Finland its weather forecast. The camera malfunctioned—or thought it deserved a moment in the spotlight—and rolled itself right through Hellinen’s live shot.

To his credit, Hellinen kept his cool, continuing to describe the high-pressure systems moving through the country and not even cracking a smile. This meteorologist is someone you want on your team when the robots begin their takeover.

The 40-second video ends with Hellinen laughing with the news anchors, his arm around the TV camera, petting it like a lovable friend. Perhaps a little affection is all this robot wanted in the first place.