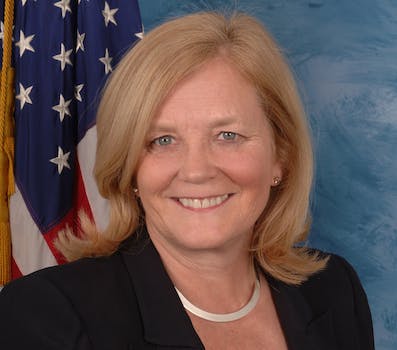 The congresswoman from Maine is the fifth Democrat to sign the activist-created declaration.

Another member of the House of Representatives has signed the Declaration of Internet freedom, signaling a growing trend that more Democrats are openly committing to a free Internet.

On Friday, Chellie Pingree (D-Maine), who has long counted net neutrality as one of her pet causes, became the fifth member of the House to sign the Declaration, a simple, non-binding, activist-drafted pledge to support the principles of a free and open Internet. Pingree, a former state senator, handily won her third term in the House on November 6.

Though the first member of Congress to sign the Declaration, California’s Darrell Issa, is a Republican, the following three House reps to sign are all Democrats, as is the sole senator, Oregon’s Ron Wyden.

It’s not always clear why more member of Congress don’t sign, whether it’s ignorance of the document’s existence, dismissal of Internet freedom of an important issue, or fear of angering the entertainment industry, which is often at odds with the way activists define Internet freedom. Never was that more transparent than during the massive Internet protest against the Stop Online Piracy Act (SOPA) in January, a bill heavily pushed by the movie and music lobbies, which activists feared would make it almost impossible for websites to host user-generated content without being shut down.

That’s in part why it’s so noteworthy that Democrats outnumber Republicans in signing the Declaration: While the entertainment lobby gives significant money to both parties, it skews Democrat. Since 2002, the music, film, and television industries have given over $25 million in campaign contributions to Republicans, but over $58 million to Democrats, according to Maplight.org’s database.

It’s noteworthy, though, that each of the previous members of the House to sign the Declaration has received comparatively little from entertainment lobbyists. Pingree has received more than any of them, though, and has actually raised almost $100,000 from the entertainment lobby in general over the course of her career (including when she was a senator).

From Pingree’s brief announcement, though, her decision to sign seems more motivated by her net neutrality goals than her position on copyright.

“Internet should be open, accesible [sic], and uncensored,” she tweeted.