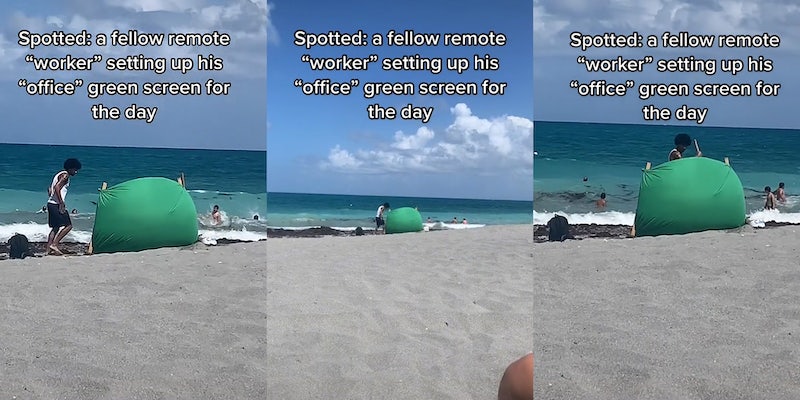 ‘This is brilliant’: Remote employee sets up green screen while working from the beach, sparking debate

'Nothing to see here but a productive and proactive employee.'

A video purporting to show a remote employee setting up a green screen while at the beach has gone viral, sparking debate across TikTok on workplace culture.

The footage, uploaded to the video-sharing platform this week by user @averyncmm, has already been viewed more than 1.3 million times and shows an individual at the beach apparently setting up their work office.

“Spotted: a fellow remote ‘worker’ setting up his ‘office’ green screen for the day,” @averyncmm writes.

The setup suggests that the worker may have to appear on camera and intends to change his background to a more work-friendly environment to conceal his actual location.

The clip quickly led to an influx of comments from users, who debated over whether the remote worker’s actions were appropriate.

Many users celebrated the unknown individual as clever and argued that he deserved to be able to work from the beach.

“The work gets done, right?” one user asked. “Nothing to see here but a productive and proactive employee.”

Others praised the worker’s actions as nothing short of “brilliant” and “genius.”

“I freaking love it,” another added.

Countless commenters also asked how they too could find a remote job where such activities are possible.

“Where are you people finding remote jobs that pay decent wages?” the commenter questioned. “So sick of sitting in traffic and waking up before the sun.”

But not everyone seemed to think that the makeshift beach office was practical.

“Idc what you say that’s not more comfortable than working from an office chair with back support in the AC,” one user argued.

Numerous users expressed concerns about the sound of the water, wind, and other beachgoers. Commenters were quick to offer solutions including noise suppression microphones and noise-cancelling headphones.

Despite a handful of negative comments, the vast majority of users felt that remote employees should be able to work in any environment so long as their daily tasks get done. The Daily Dot reached out to @averyncmm to further inquire about her video but did not receive a response by press time.

Remote work has skyrocketed in recent years due largely in part to the coronavirus pandemic. And while some companies have relied on surveillance technologies to track their employees’ every move, other businesses have given their workers the freedom to work as they please.