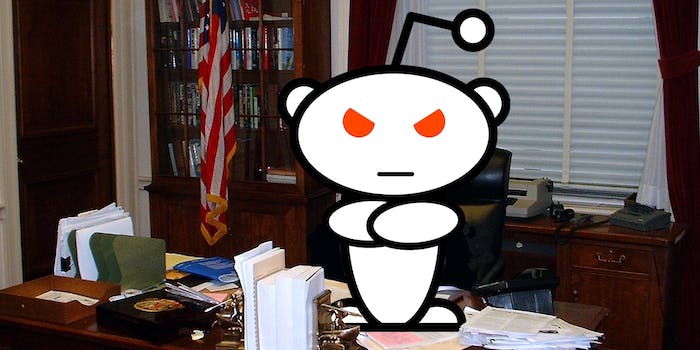 Four privacy-minded redditors from r/restorethefourth crashed their representative's office—and they might get an answer.

A handful of New York City redditors, part of a burgeoning privacy movement, were upset with their Congressman for voting to let the government still track their phone calls.

So they baked him a cake, then occupied his office.

Four redditors from the site’s r/restorethefourth subreddit—a nod to the Fourth Amendment, which guarantees a right to privacy—paid an impromptu visit to Rep. Greg Meeks (D-N.Y.) Monday afternoon.

They carried with them a small cake topped with icing that spelled “Thanks for Your #Vote4TheFourth.” And they’re in it for the long haul.

“They’re going to sit in the office until the rep apologizes for voting against the constitutions or they’re arrested,” Derick Bellamy, a representative for the Restore the Fourth movement, told the Daily Dot.

Restore the Fourth is a national movement, but New York City is one of its biggest hubs. On July 4, concurrent with other protests scattered around the country, hundreds of New Yorkers marched from Union Square to the downtown federal courthouse, carrying banners and chanting slogans against the National Security Agency. The NSA‘s vast spying programs have been heavily criticized, in the U.S. and abroad, after former contractor Edward Snowden leaked a trove of their practices in June.

Meeks is one of 217 members of Congress to vote on Rep. Justin Amash (R-Mich.)’s amendment to an appropriations bill Wednesday that would have defunded the NSA’s program to collect the metadata of possibly every American’s phone calls. Though the bill was narrowly defeated, many privacy advocates called it a moral victory, a sign that Congress is warming to voting for stronger privacy protections.

The four redditors created both livestreamed video and tried to conduct an Ask Me Anything (AMA) session with fellow users, though the video was spotty and they were slow to answer questions.

As of this writing, they seemed to find success.

“We are currently in the Congressman’s conference room. We are told he is delaying his flight to DC to speak with us, and we will be meeting at approximately 3:30/4pm,” Ben Doernberg, one of the four occupiers, reported on Reddit.

“Our demand is that the congressman apologizes for his vote and agrees to support future bills ending bulk NSA data collection.”

At that point, they’ll either get Meeks to apologize, get him to defend an unpopular message, or get arrested. Either way, they’ve made a point.

Update: At 3:20pm ET on Monday, Restore the Fourth NYC’s Twitter account announced Meeks was meeting with the four occupiers:

The first 15 minutes of Restore the Fourth’s meeting with Meeks are now available online, starting at 6:00.

“I have a little more detail than you have,” Meeks, who sits on the Foreign Affairs Committee, told them, nodding classified information. Though the video cuts out before their meeting had ended, the congressman clearly wasn’t swayed by the redditors’ arguments, and maintained that in his opinion, collecting the medata of Americans’ phone records wasn’t a violation of the Fourth Amendment.

Meeks grew most heated when pressed on the question of whether it’s fair that Americans’ aren’t able to protest against some government surveillance because that very information is classified.