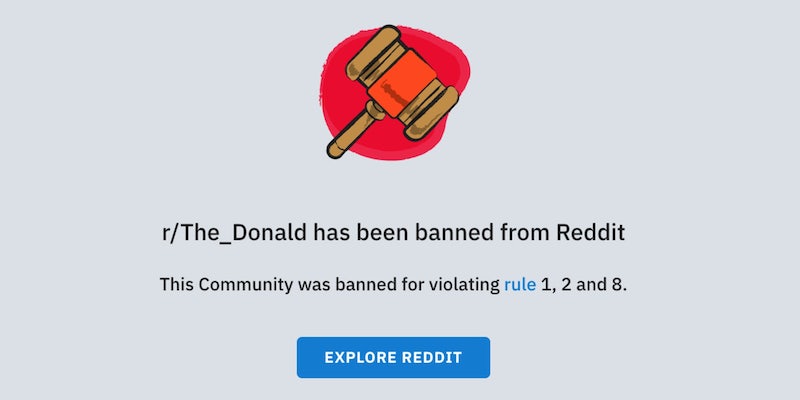 The subreddit was among nearly 2,000 that were removed by the site.

The infamous subreddit known as r/The_Donald was shut down on Monday for repeated violations of Reddit’s rules.

Devoted to defending President Donald Trump, the popular forum, which boasted more than 790,000 members, was often the center of controversy for content deemed both hateful and conspiratorial.

The decision to ban the subreddit, as reported by the Washington Post, came after months of turmoil between the forum’s moderators and users. The subreddit had been hemorrhaging users for months over complaints that the platform had become too restrictive.

The pro-Trump forum was among nearly 2,000 subreddits that were removed on Monday as Reddit unveiled a new policy regarding hate speech.

Most of the forums had been largely inactive or restricted prior to their removal. The popular left-wing forum r/ChapoTrapHouse was also banned.

Other popular subreddits swept up in the decision included r/darkhumorandmemes, r/darkjokecentral, and r/gendercritical.

Reddit co-founder Steve Huffman asserted on Monday that subreddits were banned not due to their politics but due to policy violations.

“All communities on Reddit must abide by our content policy in good faith,” Huffman said. “We banned r/The_Donald because it has not done so, despite every opportunity.”

Many Trump supporters have since left Reddit for social media sites such as Gab and Parler. A forum that looks nearly identical to how r/The_Donald looked has also been set up online under its own domain.

Reddit’s move mirrors actions from numerous social media companies including Facebook and Twitter, both of which have addressed issues regarding misinformation and hate speech in recent weeks.

Reddit co-founder Alexis Ohanian Sr. also resigned as a member of the company’s board earlier this month amid nationwide protests over the police killing of George Floyd.