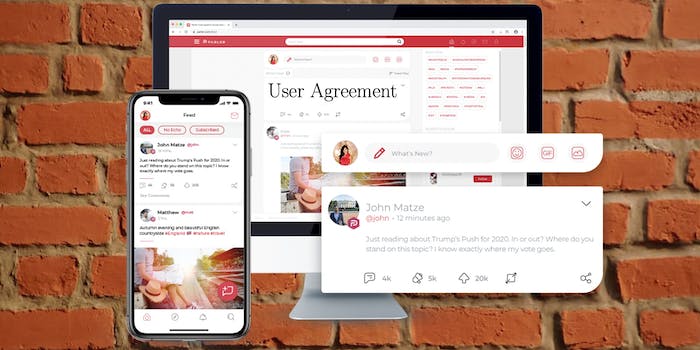 The social media site is growing in popularity among prominent right-wing figures.

Parler, a self-described anti-censorship social media platform, is growing in popularity among conservatives as an alternative to Twitter.

“These are some of the most visited sites in the world. They’re run by left-wing Silicon Valley billionaires,” Cruz said on Twitter. “They have an unparalleled ability to shape what Americans see and hear and ultimately think. And they use that power to silence conservatives and promote their radical left-wing agenda.”

Parler bills itself as an “unbiased” service “which enables free expression without violence and a lack of censorship.”

Everyone from Sen. Rand Paul (R-Ky.) to popular conservative commentator Dan Bongino have joined the site’s ranks in the past several days, prompted in part by Twitter taking action on President Donald Trump’s tweets.

But is Parler truly the bastion of free speech it claims to be?

That’s the question some are asking. A quick glance at Parler’s user agreement indicates the platform to be just as strict as any other.

For starters, Parler states that it reserves the right to delete any user’s content or entire profile at any time even if the terms of service have not been violated.

The site also explicitly bars the use of language or visuals “that describe or show sexual organs or activity.” Even content that is merely “sexual in nature” is listed as a violation. Likewise, any language or visuals deemed “morbid or degrading” are also prohibited.

Parler further states that it “never shares your personal data” while simultaneously noting that it “may share any information we receive with vendors and service providers.”

Even though platforms generally cannot be held liable for the content their users post under federal law, Parler lets its members know that they could end up footing the bill if the site is sued for something they post.

The Daily Dot reached out to Parler to inquire about its terms of service but did not receive a reply by publication time.

Another prominent user to recently join Parler is Logan Cook, formally known on Twitter as @CarpeDonktum.

Conservatives cited the instance as yet another example of Twitter’s political bias. A Twitter spokesperson confirmed to the Daily Dot at the time that Cook’s removal was linked to a history of frequent copyright abuses.

While Cook has found a new home on Parler, the social media site also explicitly states that it will enforce copyright laws. Although Cook has argued that his creations are exempt due to fair use, it remains unclear how Parler will react to takedown notices.

Given its infancy, only time will tell whether Parler is able to fulfill its promise and bring users the free speech mecca they’re hoping for.