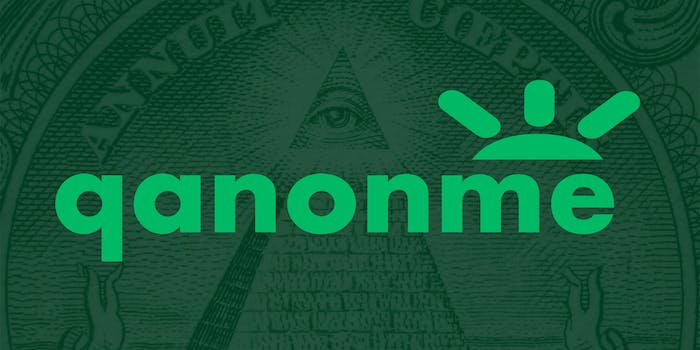 QAnon believers have used GoFundMe to turn the conspiracy into community

For all its problems, there are still elements of community in QAnon.

The QAnon conspiracy theory conjures up quite a few words, depending on one’s level of belief in it. But to at least a few fortunate people on GoFundMe, one of those words might really be “altruism.”

While social media companies continue to crack down on the sharing and searchability of QAnon, the conspiracy theory that believes Donald Trump is leading a secret war against the deep state and pedophile rings, the Q community shows a surprising willingness to take care of its own. To that end, there’s a small number of campaigns on the crowd fundraising site GoFundMe that have done shockingly well, raising money for the medical bills or living expenses of believers.

It’s not surprising that Q believers are taking to GoFundMe for support.  Medical bills are the need that makes up as much as one-third of the site’s campaigns overall. But the success of a few campaigns shows that beyond spreading conspiracy theories about the deep state and child trafficking, Q believers are willing to support each other—showing it to be not only an internet cult but also an actual community.

In many ways, this is what Q believers see themselves as, a community, rather than acolytes of a conspiracy theory. And while that theory is best known for its violence and anti-Semitism, there is a spirit of generosity when Q believers are interacting with each other. GoFundMe hosts a fairly small number of QAnon related campaigns, most of which can be found searching either for “QAnon” itself or variations on the common Q catchphrase “where we go one we go all.”

While many are just people looking for money to “raise awareness” of Q or buy media equipment, there is a genuine need in the Q community to pay medical bills or debt. And these campaigns vary wildly in their success, with the majority raising almost nothing. But a few have been successful— boosted by self-proclaimed “digital soldiers” coming to the aid of their comrades.

By far the most heavily-supported fundraiser under the QAnon umbrella is “the Michael Buono Fund,” a fundraiser set up in July to raise money for the cancer treatment of Mike Buono, a father of two and former U.S. Marine described by his wife as an “American patriot to his core” and “an avid researcher for truth.” It’s that element that drives the QAnon-adjacent part of the story. Buono’s wife Tiffany ends all three updates to the GoFundMe with “WWG1WGA”—the abbreviation for “where we go one where we go all.”

The fundraiser was heavily donated to by QAnon followers, many of whom used variations on QAnon slogans in their messages, or donated in the amount of $17 – representing Q, the 17th letter of the alphabet. The fundraiser was also heavily promoted on Twitter, being shared using Q iconography and by accounts that are obviously involved in Q.

And while it might seem counterintuitive, Buono’s fundraiser has actually been quite successful, raising over $112,000 toward a goal of $500,000 to help pay for the extensive treatment and therapy he needs. It’s not clear just how much of donations that have come in are from QAnon followers or how heavily involved the couple are in the movement, as Tiffany Buono did not respond to a request for comment from Daily Dot, while a Twitter account with over 40,000 followers that appears to belong to Mike Buono has the writer of this story blocked.

While Buono’s campaign is the most heavily-funded Q-related GoFundMe, it’s just one of many out there getting the patriot community to open its wallets for something other than QAnon-branded swag.

Some have done better than others, but many have gotten at least some kind of contribution while endorsing Q.

A fundraiser for a poster who goes by “QMailDrops” raised over $2,000 to fight an unspecified illness before being closed down by its organizer. An August campaign for a Colorado veteran who “warned Greely and Denver about PizzaGate being real back in 2016” has raised $500 so far. And a third party declaring “WWG1WGA” to raise money for a friend’s cancer surgery brought in $365.

There are also Q-branded fundraisers for a Finnish Q fan to fly to America and attend a Trump rally (he wasn’t able to before the COVID pandemic hit), a badly injured and homeless QAnon believer who raised $1,600 to get his life back on track, a WWG1WGA-branded fundraiser by “Archangel Gabriel” that’s raised $2,700 to prevent the organizer from losing their home, and maybe most infamously, the $19,000 raised by Douglas Belmore. An Arizona adjunct professor who was fired for showing the QAnon video “The Plan to Save the World” to his class, Belmore became a celebrity in the Q movement, who saw him as a victim of the deep state’s desperate need to keep the young people of Mesa Community College from learning what was really going on in their government and business. Belmore now runs a YouTube channel called “The Qniversity,” with 33,000 subscribers.

Finally, there are GoFundMe campaigns for even more esoteric Q-related pursuits, such as the $2,400 raised to create a “QAnon Hall of Records” and a Q-branded project that raised $740 to “end 21 Century Child Abuse.”

None of the people involved with these fundraisers responded to Daily Dot’s questions about their belief in Q.

It should be noted that for the success that a few of these have had, most haven’t made their goals. And there are far more QAnon campaigns that have raised nothing. But at least the Buono and Belmore fundraisers prove that when faced with one of their own running into trouble, Q acolytes are more than happy to help out. So they might believe in a conspiracy theory about Soros-funded pedophile traffickers communicating in codes and spying on Donald Trump, but they’re also there for each other when someone with a big profile in the movement is in need.