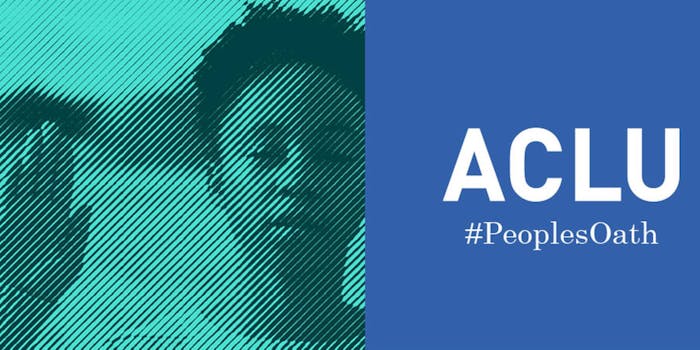 A new campaign by the American Civil Liberties Union is encouraging people to create and pledge their own oath to protect the U.S. Constitution.

The initiative, which has been timed to begin this week, coincides with President-elect Donald Trump’s Jan. 20 inauguration ceremony where he will take the presidential oath.

“As the 45th president takes the oath to affirm that he will, to the best of his ability, preserve, protect and defend the Constitution of the United States,” said ACLU Project Director and Senior Attorney Dale Ho in a statement. “We the People will take the People’s Oath to declare our commitment to core American values of justice and freedom.”

The ACLU says that since October 2016, it has experienced a 60 percent rise in membership applications and now has more than a million supporters. The organization is asking people to express themselves through the campaign and to engage actively in the political process, voicing their concerns.

To make the process simple and interactive, the ACLU has set up a page at peoplesoath.org where people can submit a photo or video as well as write their own pledge. The page instructs people to begin with the traditional, “I do solemnly swear to preserve, protect, and defend the Constitution of the United States to ensure…” and then to creatively finish by drawing attention to a civil liberties issue, “for example, that ‘I’m the only one who gets to decide what to do with my body’ or …‘that my Muslim-American brothers and sisters get the same rights I do.’”

Many have already taken part, posting pledges on social media platforms with the hashtag #PeoplesOath:

Take the #PeoplesOath. Join me and the @ACLU to help protect the rights guaranteed to all of us by the Constitution. https://t.co/m1J2uvsrYF

As always with social media campaigns, however, some are utilizing the campaign’s own hashtag and graphics to promote an alternative message:

#peoplesoath I do solemnly swear to uphold and defend the constitution, against all enemies, foreign and domestic. Even the ACLU and NYT.