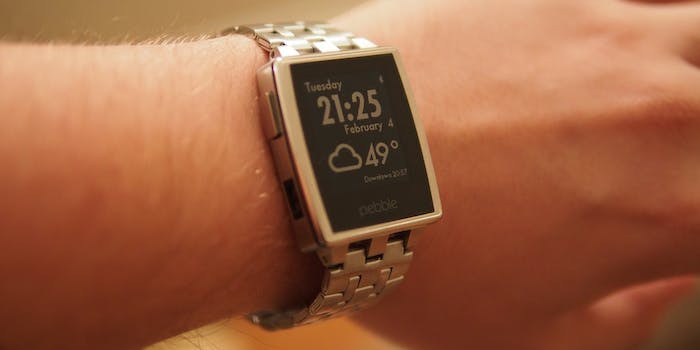 Does Pebble’s next smartwatch stand a chance?

Pebble may announce a new smartwatch on Tuesday, but should we care?

It’s hard to believe it’s been over two years since Pebble watches began shipping to early Kickstarter backers, and despite respectable efforts from Samsung, Motorola, and others, it’s still one of the best smartwatches on the market. Now, the company that made “smartwatch” a thing is set to debut the next chapter in its story, and it’s going to happen Tuesday morning, Feb. 24.

Early rumors suggest that an entirely new device is on the way. A thinner design, larger full-color display, and voice recognition are all reportedly in the cards for Pebble’s next smartwatch, as well as a new operating system that builds on that of the original Pebble OS.

The anticipation for a “Pebble 2” has been growing ever since the launch and warm response of the company’s first watch, and bringing the brand more in line with the advancements made my competitors—including the upcoming Apple Watch—seems like a safe bet. However, it’s entirely possible that the upcoming announcement doesn’t have anything to do with the sequel to the Pebble, and may revolve around something entirely different.

Even if the next Pebble is just days away from its first showing (and despite the fact that the original is still one of the best selling smartwatches ever) there’s reason to be skeptical about the company’s next move.

It’s been almost three years since the first Kickstarter backers threw their money at their computer monitors, and those 68,929 early adopters are the engine that kept the Pebble churning along. Now, with so many other options out there and a hotly anticipated wearable from Apple on the horizon, building a new fanbase for an all-new device is far from easy.

9to5Mac suggests that the new Pebble will be launched as a Kickstarter campaign as well, perhaps praying that lightning will strike twice. This seems odd, considering the company already has retail partners in place such as Best Buy and Amazon. If Pebble does indeed decide to ask customers to commit their cash months ahead of time, that money could be just as easily spent on a smartwatch that can be taken home today instead.

The original Pebble had virtually nothing in the way of competition, and it was the first time many technology buffs considered getting smartphone notifications on their wrists. Today, we have a long list of examples of how bad a smartwatch can be—will.i.am knows this all too well—and anyone who has been burned by an impulse buy in the past two years or so is probably going to see yet another Kickstarter smartwatch as a risk rather than a sure thing.

At the moment, I’d say the announcement of an all-new Pebble is exciting, but repeating the success of the original is going to be an uphill battle.

Photo via roguelazer/Flickr (CC BY SA 2.0)