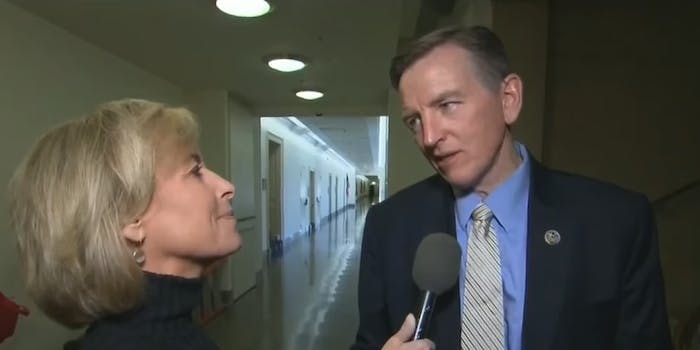 An Arizona congressman who implied that the white supremacist violence in Charlottesville, Virginia, this summer could have been funded by leftists, quickly tried to backtrack his unsubstantiated claims when pressed by CNN before he ran away from a reporter calling them “fake news.”

Rep. Paul Gosar (R-Ariz.) brought up the Charlottesville conspiracy theory while speaking with Vice, where he claimed that the person who started the rally was “from Occupy Wall Street that was an Obama sympathizer.” In the interview, he also thought it would be “interesting” to find out whether billionaire George Soros, who is known to back liberal causes, funded the white supremacists.

“They absolutely believe what they say,” she told CNN’s Anderson Cooper. “I presented that to him. I said, ‘I’ve talked to these people. They don’t sound like leftists.’ He just smirked at me.”

On Wednesday, CNN confronted Gosar about his conspiracy theory, and after trying to backtrack a bit on his claims, he quickly became flustered and began insulting the news outlet.

“My proof will be coming, check my website out,” Gosar said before walking away and criticizing CNN. “You’re not real news, you’re fake news.”

The congressman and an aide shouted “fake news” as they walked down a staircase away from the reporter.

Vice reported on Gosar’s comments earlier this month. Gosar is being sued in federal court by a constituent whom he blocked on Facebook. Other similar cases have ruled in favor of the blocked constituents, arguing that politicians violate their First Amendment rights when they block American citizens on the social media platform.