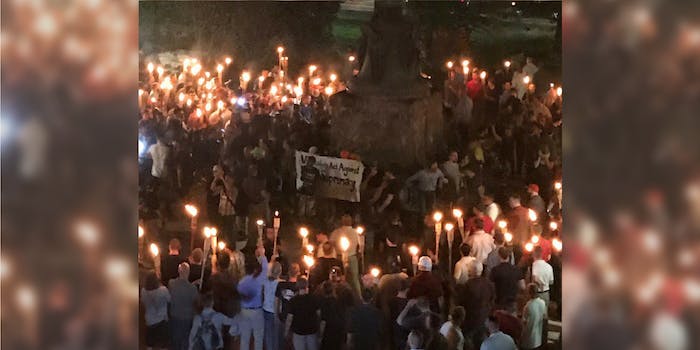 The event was a preview of today's 'Unite the Right' rally.

The dormant University of Virginia campus was filled with hate and vitriol Friday night when hundreds of white supremacists and white nationalists held a tiki torch-lit march, chanting phrases such as “Blood and soil,” “You will not replace us,” and “One people, one nation, end immigration.”

PHOTOS: #UniteTheRight torch rally at UVa ends at the Rotunda and in violence. #Charlottesvillehttps://t.co/5p1b2cDP5k pic.twitter.com/cdXa7PtiuE

Demonstrators chant "anti-white" at a torch-lit march on @UVA's campus ahead of Saturday's "Unite the Rally" rally. (Credit: IG/hectorapm) pic.twitter.com/hINgozZJF9

According to the Washington Post, the march, which lasted only 15 to 20 minutes, was made up mostly of white men in their 20s and 30s, though some appeared to be teenagers, and footage from the rally shows women were present, too. Nazi salutes were prevalent.

The march ended in a rally around the campus’ statue of Thomas Jefferson, UVA’s founder, and dispersed after a counter protester used a chemical spray on a dozen or so marchers. There were no immediate reports of arrests stemming from the rally or small counter protest.

The evening’s march came on the eve of a white supremacist and alt-right-led rally, Unite the Right, which began early Saturday morning. Notable alt-right figures expected to attend the Charlottesville, Virginia, rally include Richard Spencer, Mike Enoch, and Pax Dickinson.

According to the rally’s organizer, a white supremacist named Jason Kessler, white supremacists, nationalists, and members of the alt-right are congregating at Emancipation Park, formerly Lee Park, to support the site of a statue of Robert E. Lee. The city voted to remove the statue earlier this year, but the decision is still pending a judge’s ruling expected later in August.

In a statement addressing the rally, Charlottesville Mayor Mike Signer called the UVA march a “cowardly parade” of hatred and racism, and he said he was “disgusted” by the display of intimidation.

Update 12:55pm, Aug. 12: According to the New York Times, UVA officials said in a statement that one person was arrested and charged with assault and disorderly conduct. Several others were injured, including a university police officer injured while making the arrest.