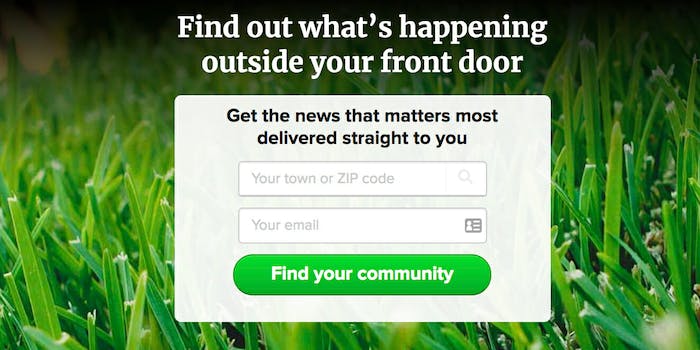 Trust in media is declining. This app wants to do something about it.

The U.S. is seeing a steady downward decline of trust in news media. But despite decreased reliance on TV news, local media may finally be regaining the public’s confidence. A news app that launched in November hones in on that glimmer of hope, and the developers behind it want to help revive American trust in the fourth estate.

Patch is a digital, hyperlocal publication site that brings news of immediate interest to small communities. Patch CEO Warren St. John described hyperlocal news as community-based information that is relevant to consumers in smaller towns and suburbs of larger cities.

“The geography is more specific than just, say, a metropolitan area,” St. John told the Daily Dot. “When you get small like that, one thing you find is that people care about more than one place that small—often. They care about where they live, they may care about where they work, or maybe where they grew up. That’s one of the major insights that has driven some of the functionality for the app.”

Originally launched as a desktop publication, Patch targets small areas where local news is on the decline. It now aggregates news for more than 1,200 communities across the U.S.

The app was designed by Taylor Martinez, a former University of Nebraska quarterback whose football career was stalled due to a foot injury. Martinez said that he was inspired to work on the Patch app because he wanted to make news engagement easy and accessible.

“I came here about three years ago to build a very intuitive app for our users,” Martinez told the Daily Dot. “When I came to Patch, we didn’t have an app on the App Store, and I thought that it would be an accessible, quick way to get news out.”

Martinez and his team are adding features to make the app even more practical. One of these features includes a forum in which users can share and discuss issues for their communities. “We’ve already seen a good engagement on the Patch website, and we’re hoping to expand the community feature,” Martinez said.

According to the Patch website, “Patch towns” are placed strategically in areas that are considered to be “local” and centralized to small towns and suburbs, in addition to large area news. The geographic expansion feature of the app can target smaller communities in ways that other major news applications can’t.

Apple News, for example, only allows users to pick their news based on publication rather than geographic location. This feature is especially useful to small town and rural area users, who often rely on local television for their most important news.

“We think of it as a much more customizable view of local news,” St. John said. “We cover politics, the local economy, businesses that are opening and closing and are hiring. We cover whenever there’s a controversy in a town. [We] prioritize being first and telling people something that they don’t know about their individualized communities.”

As the media faces the tremendous task of earning public trust and overcoming the notion of “fake news,” zeroing in on local news is common sense. Regional reporting sets the foundation for checks on authority at all levels.

“Local news connects people directly to their communities, and the value of it is profound because it is truly the essence of democracy,” St. John said. “It represents the very notion of community and people having something in common that connects them.”