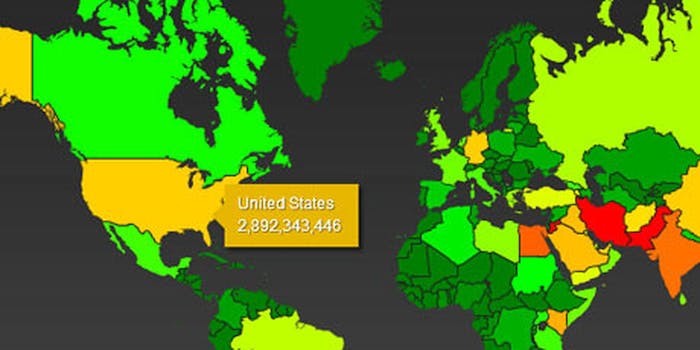 The National Security Agency (NSA) is working hard to come off as the most science-fictiony intelligence agency this side of Special Circumstances. And it’s succeeding.

The NSA a global data mining tool that parses the enormous amount of data it gathers from its global eavesdropping efforts and maps it by country. It’s called “Boundless Informant,” and it collected 97 billion pieces of information in March of 2013 alone.

“The tool,” reads the fact sheet, “allows users to select a country on a map and view the metadata volume and select details about the collections against that country.”

At a congressional hearing in March 2012, NSA’s Director Gen. Keith Alexander told the members of the Emerging Threats and Capabilities Subcommittee of the Armed Services Committee that his agency could not gather information within the U.S.

“No no, we don’t have the technical insights in the United States. In other words, you have to have something to intercept or some way of doing that either by going to a service provider with a warrant or you have to be collecting in that area. We’re not authorized to that nor do we have the equipment in the United States to collect that kind of information.”

However, not only does the NSA have such capabilities and equipment, but it uses them, and it does so often.

The U.S. is among the countries most surveilled by the agency.

The NSA has repeatedly refused to provide elected officials with data on its activities. If the revelations continue at this pace, NSA’s intransigence may no longer be a stumbling block to a clear and complete picture of how the most secretive intelligence agency in the country conducts its business. And exactly how much of other people’s business it gets into.

H/T Gawker | Photo via The Guardian