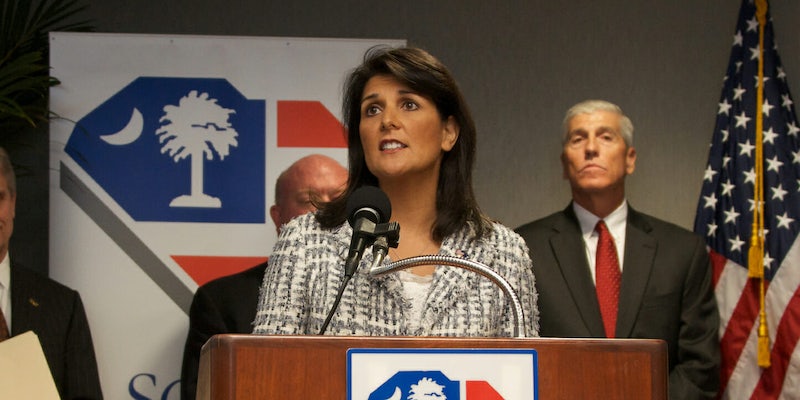 A lot of people aren't taking her advice apparently.

United Nations Ambassador Nikki Haley told a group of conservative high school students that the “own the libs” style of online behavior should not be the way they engage in political discourse, a counter-narrative to the popular saying among fervent right-wing internet users.

Haley gave the advice on Monday at the High School Leadership Summit at George Washington University, the Hill reports. The event is held by Turning Point USA, a conservative group.

She asked people to raise their hands if they’ve “ever posted anything online to quote-unquote ‘own the libs,’” the news outlet said, to which a large number of people responded and applauded.

Apparently, that was not the answer Haley was looking for.

“I know that it’s fun and that it can feel good, but step back and think about what you’re accomplishing when you do this—are you persuading anyone? Who are you persuading?” Haley said. “We’ve all been guilty of it at some point or another, but this kind of speech isn’t leadership—it’s the exact opposite.”

“Real leadership is about persuasion, it’s about movement, it’s bringing people around to your point of view. Not by shouting them down, but by showing them how it is in their best interest to see things the way you do.”

The “own the libs” style of political discourse is a common thing among online supporters of President Donald Trump. In fact, the idea was all over Twitter when the president nominated Brett Kavanaugh to the Supreme Court.

The Daily Dot spoke with C.D. Carter, a fantasy football expert and satirical Twitter personality, about “owning the libs” and his book, 69 Ways To Own The Libs, on the We’re All Gonna Die podcast in May.

You can read all of The Hill’s report here.