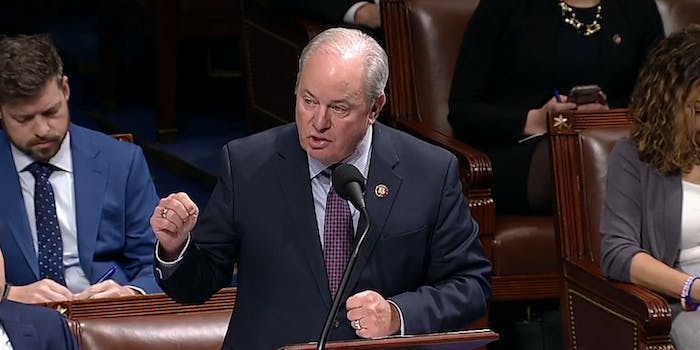 Rep. Mike Doyle championed the Save the Internet Act.

Rep. Mike Doyle (D-Penn.), a Democrat in the House of Representatives who championed a bill that would restore net neutrality, “definitely” intends on reintroducing legislation to restore the rules, his office told the Daily Dot.

While it remains to be seen exactly how the bill will take shape, Doyle, a member of the House Energy and Commerce Committee and chairman of the communications and technology subcommittee, has a history of championing net neutrality. In 2019, he pushed the Save the Internet Act in the House of Representatives.

That bill essentially would have codified the 2015 Open Internet Order and was enthusiastically endorsed by net neutrality advocates. Doyle ushered it through committee hearings and markups and eventually a full vote in the lower chamber in April 2019.

While the bill passed the House of Representatives, the Senate version of the Save the Internet Act languished in the upper chamber. Several attempts by Democrats to force a vote on the bill were blocked by Republicans.

With the next Congress officially underway, the congressman plans on continuing a push for net neutrality restoration, his office said.

“Congressman Doyle definitely intends to reintroduce legislation to restore net neutrality,” the congressman’s office told the Daily Dot in a statement. “Broadband access is more important than ever, and consumers need these protections—and a cop on the beat—now more than ever.”

A member of the congressman’s staff said as the committee is still getting organized, the timing for everything is still up in the air, but net neutrality remains a high priority.

While the Save the Internet Act previously faced opposition in the Senate, a potential new net neutrality bill has a much clearer path in the wake of Democrats taking control of the Senate following the Georgia Senate runoff elections earlier this month.

After passing in the House in April 2019, the Senate version of the Save the Internet Act faced stiff opposition in the Republican-controlled upper chamber.

However, Democrats were able to pick up both of the Georgia Senate seats in the elections, giving them control of the Senate with Vice President-elect Kamala Harris serving as a tie-breaking vote. That instantly increases the chances of a net neutrality bill passing through the chamber and eventually making its way to President Joe Biden’s desk.

But the path isn’t entirely without obstacles. With a slim majority only with Harris (who has been vocal in supporting net neutrality) serving as a tie-breaker, Democrats would also have to convince at least one member of their party—Sen. Kyrsten Sinema (D-Ariz.), who did not join her colleagues in supporting the Save the Internet Act—or a Republican senator, to get a majority of senators in favor of it.

Getting Republican senators on board with net neutrality issues isn’t without precedent. In 2018 the Senate passed a Congressional Review Act (CRA) effort that would have overturned the Federal Communications Commission’s (FCC) repeal of net neutrality.

During that vote, three Republicans bucked the rest of their party and voted for the CRA. Those senators were Sen. Susan Collins (R-Maine), Sen. Lisa Murkowski (R-Alaska), and Sen. John Kennedy (R-La.). All three are still in the new Senate. The CRA effort died after passing in the Senate, as the then-Republican controlled House failed to gather the required signatures to vote on it.

It has been widely speculated that Biden winning the 2020 election meant that net neutrality would come back in some form, but now it looks like at least part of the fight to restore the rules will unfold in Congress.