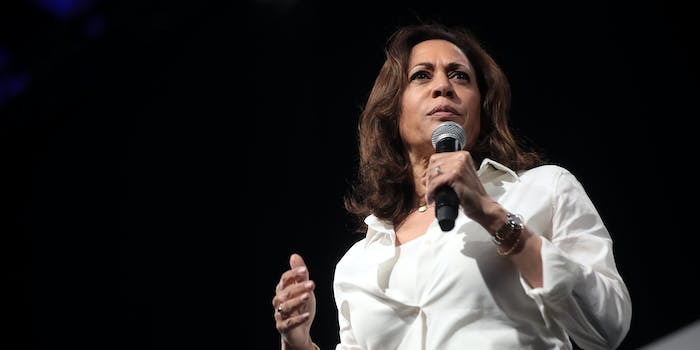 Harris has a long history of supporting net neutrality.

Joe Biden announced on Tuesday that Sen. Kamala Harris (D-Calif.) would be his vice-presidential candidate, giving the ticket a long-time supporter of net neutrality.

Harris was one of several 2020 Democratic hopefuls who brought up the issue on the campaign trail, promising that if she were elected, she would reverse the Federal Communications Commission’s (FCC) “disastrous” repeal of net neutrality rules in 2017.

The California senator’s stance on the issue—while she was vying for the Democratic nomination—wasn’t a shock, as she has a long history of being a vocal supporter of the rules. Biden’s campaign had been somewhat non-committal on the issue until recently.

Last year, Harris’ campaign told the Daily Dot she would appoint an FCC chair committed to bringing back net neutrality if elected. That parallels proposals created by a “unity team” of supporters chosen by Biden and Sen. Bernie Sanders (I-Vt.) to craft policy for the former vice president to consider if he beats President Donald Trump in the upcoming election.

Harris also supported net neutrality following a much-anticipated court decision regarding the rules last October. The United States Court of Appeals District of Columbia Circuit ruled that most of the FCC’s repeal would be upheld. However, their decision also opened the door for states to enact their own laws in the absence of federal ones.

In response to the decision, Harris told the Daily Dot that “the fight to protect the future of the internet continues,” and encouraged states to enact their own laws.

However, before that, Harris pushed for the passage of the Congressional Review Act (CRA) in 2018 that would have undone the FCC’s repeal and urged her Senate colleagues last year to vote for the Save the Internet Act, a bill that would restore the 2015 Open Internet Order that established net neutrality rules.

If she were to become the next vice president, Harris would not be in a direct position to steer the FCC into restoring net neutrality, but her support for the issue as a member of Congress could be a factor in any legislative options—like the Save the Internet Act—that could hypothetically come up during a potential Biden-Harris administration.

Given that it’s also been a policy Biden has been relatively silent on, it’s possible she could help drive the agenda.

She was also one of only a few Senators who questioned then-Supreme Court nominee Brett Kavanaugh about whether he would recuse himself from hypothetical net neutrality cases because of a dissent he wrote in 2017 where he argued the First Amendment rights of internet service providers (ISPs) were being violated by net neutrality.

Meanwhile, Harris’s home state, California, passed a state-level net neutrality law that is considered stronger than the 2015 rules passed by the FCC. The U.S. Justice Department just recently restarted its attempts to block California from enforcing its law.

Under a Biden-Harris administration, it’s likely that effort would end.