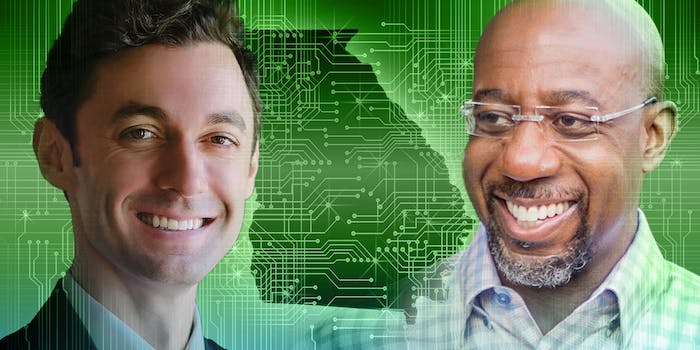 Democratic control of Congress makes the chances of a net neutrality bill passing much higher.

With the makeup of the Senate in the balance, all eyes were on the Georgia runoff elections—and the fate of a potential net neutrality bill in Congress is one of the many legislative options that will be directly impacted by its result.

Raphael Warnock is the projected winner in one race and Jon Ossoff seems poised to also win the other, meaning that Democrats will control the presidency, Senate, and House of Representatives. It is now a fair bet that net neutrality will be one of the many proposals that makes its way to President-elect Joe Biden’s desk.

Restoring net neutrality has become a clear part of the Democratic agenda. Since 2019, Democrats have pushed for the Senate to take up the Save the Internet Act—a bill that would essentially codify the FCC’s 2015 Open Internet Order—after it passed in the House of Representatives. Crucially, the 2015 Open Internet Order classified ISPs under Title II of the Communications Act. The FCC, under Chairman Ajit Pai, repealed net neutrality rules in 2017.

Under Republican control, the Save the Internet Act stalled in the Senate despite multiple attempts by Democratic lawmakers to try and force a vote on the bill. Now that the Senate is projected to be under Democratic leadership, a reintroduced net neutrality bill would not face the same resistance.

A net neutrality bill has been backed by tech advocates and experts as the best way to end party control of the FCC being the deciding factor on reinstating or repealing the rules. Passed legislation would make net neutrality no longer at the whims of whatever party controls the agency.

Warnock and Ossoff have both come out in favor of net neutrality, with Warnock tweeting just ahead of the November elections that the U.S. needed to “re-establish net neutrality protections.”

However, even with the 50-50 split Senate (and a Vice President-elect Kamala Harris as the tie-breaker), a new net neutrality bill like the Save the Internet Act is not necessarily a slam dunk.

The necessity of the tie-breaker makes every vote count. The one Senate Democrat who did not join every other Democrat in co-sponsoring the Save the Internet Act, Sen. Kyrsten Sinema (D-Ariz.), would need to vote in favor of it to pass.

Instead of joining the rest of the Senate Democrats in supporting the Save the Internet Act, Sinema formed a working group with Sen. Roger Wicker (R-Miss.) to find a “bipartisan solution.” The working group has been criticized by tech advocates as a “charade.”

There are other options, like convincing a Republican to vote for the bill. That kind of path isn’t without precedent: In 2018, the Senate passed a Congressional Review Act (CRA) effort that would have overturned the FCC’s repeal of net neutrality.

During that vote, three Republicans bucked the rest of their party in voting for it: Sen. Susan Collins (R-Maine), Sen. Lisa Murkowski (R-Alaska), and Sen. John Kennedy (R-La.). It’s possible that they could vote for a bill like the Save the Internet Act.

Either way, Democratic control of the presidency and Congress makes a net neutrality bill much more of a reality.