How do you act when your scrappy group of Internet activists bests Comcast?

You fly a giant Grumpy Cat to their headquarters to mock them, of course.

Early Friday afternoon, the day after the FCC voted to approve the strongest net neutrality rules in history, Internet advocacy groups Fight for the Future, Demand Progress, and Free Press flew an airplane over Comcast’s corporate headquarters in Philadelphia. Behind it, a 3,000 square foot banner carried Grumpy Cat’s warm visage, with the words “Comcast: Don’t Mess With The Internet”—a line recycled to their 2012 victory over the Stop Online Piracy Act. In finer print, it read: “Public Wins. Team Cable Loses,” followed by the hashtag #SorryNotSorry. 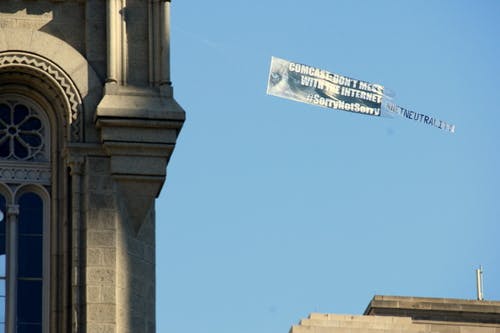 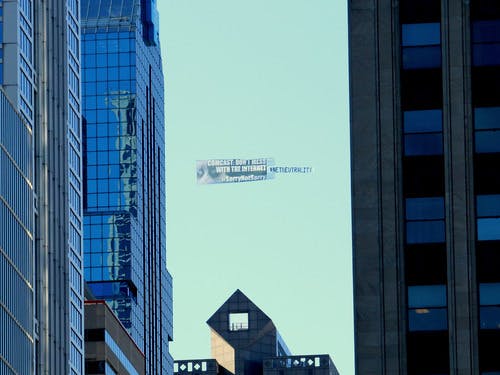 The Federal Communications Commission’s plan, introduced by Chairman Tom Wheeler and approved by the commission’s Democratic majority, will regulate broadband services to ensure that all Web traffic is treated equal. By categorizing ISPs as “common carriers” under Title II of the Telecommunications Act, the commission now has the authority to prohibit Comcast and other providers from charging companies new fees for faster access to customers.

Before making its decision, the FCC received approximately 3.7 million comments from the public specifically on the issue of net neutrality. More than 40,000 websites participated in an online protest last September, known as the Internet Slowdown, which delivered to the commission more than 770,000 of those comments in a single day.

Of course, fight is never truly over: Comcast already is grumbling about a lawsuit, and Republicans are exploring undermining the FCC with legislation.

But Friday, the grassroots groups got to add their exclamation point to their victory.

“Comcast should have known that Internet users would not tolerate their blatant attacks on free speech and democracy,” Fight For the Future campaign director Evan Greer said in a press release.

“Let this be a warning to every goliath company, government, and institution of power in the world. If you mess with the Internet, the Internet will mess with you.”

Photo via wackyvorlon/Flickr (CC BY 2.0)