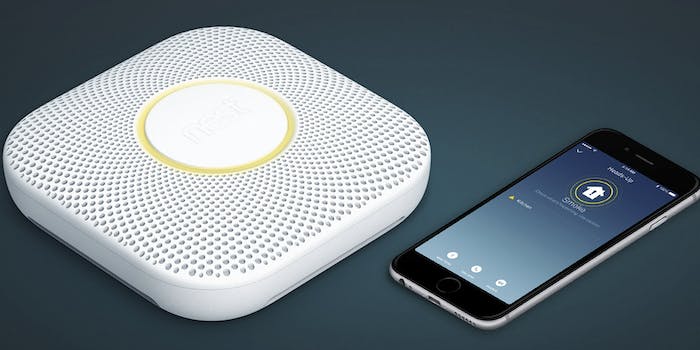 Nest’s new smart smoke alarm talks to your house, helps it not burn down

The Nest Protect just got a big update.

Nest—you know, that internet of things company that Google paid $3.2 billion for last year—really wants to replace your smoke and carbon monoxide alarm. To that end, the company today showed off an upgraded version of Nest Protect, which is gaining intelligence so fast we worry it may soon become sentient.

Like its predecessor, the new second generation Nest Protect is both a smoke and carbon monoxide alarm, it syncs with the Nest smartphone app, and it speaks its alarms rather than simply sounding a noisy siren.

This new version has a few special tricks up its sleeve, including a more precise smoke sensor that can tell the difference between smoke and steam, detect both fast and slow burning fires more accurately, and a lifespan of up to ten years. That’s enough time for your pants to go out of style and then come back into style.

On top of all that, it’s also capable of testing itself, and will run sensor checks and sound checks regularly. If you have a Nest thermostat, the Protect will communicate with it to determine when you’re home and when you’re away, and only run the tests at times when you’re typically not around. Yes, it’s a smoke alarm that knows your schedule, which is half cool and half creepy.