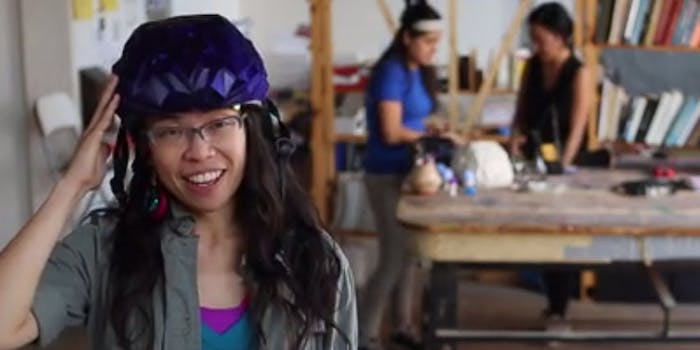 More than just a lifesaver.

Wearing a helmet while biking is important, and if you needed any motivation to strap a head protector on, this mind-reading gear could do the trick. Kickstarter project MindRider looks like an ordinary bicycle helmet, albeit one that’s suffered a few blows. Underneath its jagged exterior, however, is a complex system that monitors brainwave activity.

“The MindRider helmet translates your mind’s engagement levels through a comfortable soft sensor embedded in the helmet’s foam. This forehead sensor is part of a BCI (brain-computer interface) that uses EEG (electroencephalography) to measure signals from your brain and translate them into a level of engagement,” the campaign’s Kickstarter page explains. “Your engagement is then color-coded on a gradient ranging from green (relaxed) to red (sharply focused), and displayed on  a small color-changing light. MindRider uses BLE (Bluetooth low energy) to connect with your compatible mobile device. The MindRider app adds your data to an interactive map.”