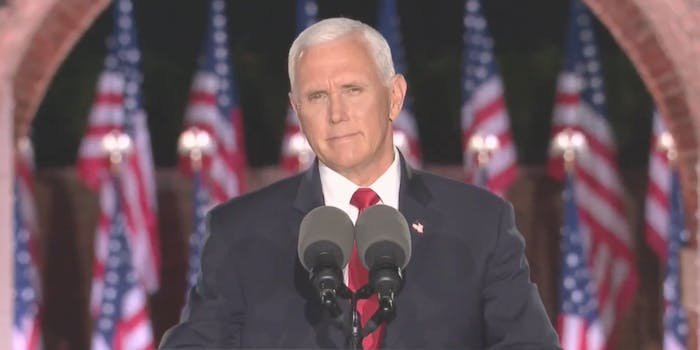 The couple set to host the vice president has donated over $220,000 to Trump's re-election efforts.

Vice President Mike Pence is set to attend a fundraiser in Montana held by followers of the QAnon conspiracy theory.

An invitation revealing the hosts’ identities and analysis of their social media profiles by the Associated Press show that the couple has repeatedly shared QAnon related content.

The event, set to be held by Caryn and Michael Borland in Bozeman next week, will not only be attended by Pence but by other prominent figures including former Fox News host turned Trump campaign fundraising official Kimberly Guilfoyle.

Both Michael Borland’s Facebook and Twitter accounts feature the Q logo as well as the popular QAnon slogan, “Where We Go One We Go All.”

The fundraising event is unsurprising given that couple has contributed over $220,000 to the president’s re-election efforts.

Both Caryn and Michael have visited the White House and were even pictured with Trump in December.

Despite the QAnon movement being considered a potential domestic terror threat by the FBI and linked to numerous instances of violence, the president has declined to condemn the group.

In fact, Trump has gone as far as to amplify the group’s false claims.

Pence, however, dismissed the conspiracy theory in an interview with CBS last month.

“I don’t know anything about QAnon, and I dismiss it out of hand,” he said.

QAnon adherents have recently pointed to incidents in which missing children were located as proof of the president’s attempts to battle the deep state, although the majority of cases were not related to one another and had nothing to do with child trafficking as alleged.