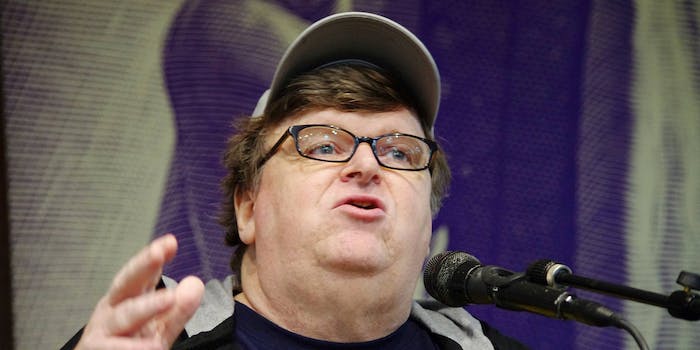 The filmmaker accused Trump of 'squatting in our Oval Office.'

No love was lost between Michael Moore and President Donald Trump on Valentine’s Day as the documentary filmmaker branded Trump a “Russian traitor” in an online outburst.

Moore also urged the president to “vacate” the White House, explaining that the president had two options: resignation or impeachment.

Um, @realDonaldTrump — It's now noontime in DC & it appears you are still squatting in our Oval Office. I gave u til this morning to leave.

What part of "vacate you Russian traitor" don't you understand? We can do this the easy way (you resign), or the hard way (impeachment).

Moore has been a long time opponent of Trump but predicted that the Republican would win the election in November. Moore had even offered to pay the legal fines of any electors who changed to vote against Trump.

The latest comments came as part of a much longer tirade about the resignation of National Security Adviser Lt. Gen. Michael Flynn. Flynn stepped down after it was revealed that he misled Vice President Mike Pence about the nature of his communications with Russian ambassador Sergey Kislyak. In those calls, Flynn and Kislyak illegally discussed foreign policy and Flynn allegedly floated the idea of the Trump administration dropping Obama-era sanctions against Russia.

In his thread of tweets, Moore, who is known for his expository political films, declared that Trump himself was responsible for Flynn’s misconduct. Moore wrote, “Flynn DID NOT make that Russian call on his own. He was INSTRUCTED to do so.”

Let's be VERY clear: Flynn DID NOT make that Russian call on his own. He was INSTRUCTED to do so.He was TOLD to reassure them. Arrest Trump.

TRUMP KNEW EVERYTHING. It will all come out. Along with the rest of Trump's collusion & obedience to Putin. #IMPEACH pic.twitter.com/HGdvgjHumY

Members of Congress from both parties on Tuesday called for a broader investigation into the Trump administration’s ties to Russia.