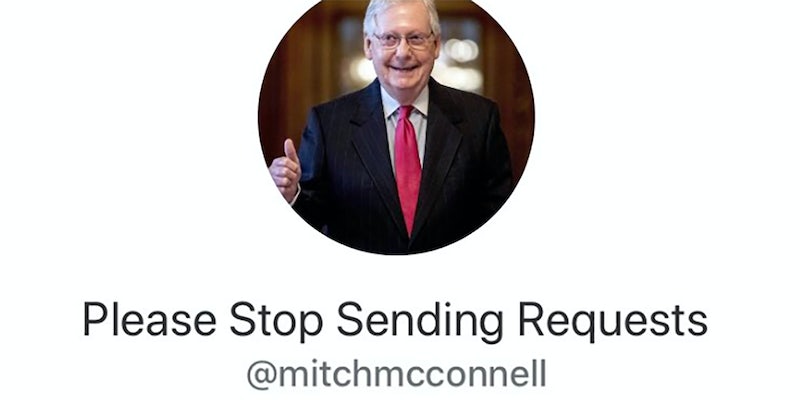 The Senate majority leader, seen as a key obstacle to COVID stimulus checks, is getting flooded with requests online.

Sen. Mitch McConnell (R-Ky.) has positioned himself as the primary obstacle to $2,000 stimulus checks in a new debate over coronavirus relief ignited by President Donald Trump’s late-to-the-party Twitter appeals last week. McConnell declared Wednesday, according to CNN, that a House-passed bill proposing more substantial stimulus checks has “no realistic path to quickly pass the Senate.” So, Americans have taken to platforms including Venmo and PayPal to directly request stimulus checks from McConnell himself.

Citizens took to Twitter to document their attempts as well as to encourage others to do the same. One, claiming McConnell has a Venmo account tied to his general Senate email address, asserted, “I’m getting my #Stimulus one way or another.”

Another simply said, “Mitch McConnell is on Venmo,” followed by, “Twitter, do your thing.”

Another citizen, slightly more aggressive in her approach, dovetailed her request for “my damn stimulus” with the #mitchbetterhavemymoney hashtag that is currently making the rounds.

Someone, stymied in her attempts to Venmo McConnell, “took it to Paypal.”

There was math involved in one of the appeals, though, as Hamish Mitchell deducted the $600 checks that were approved, recommending that people request the $1400 difference.

And, as Christine Cupo shared, there’s even TikTok crossover, with a TikToker filming her delighted reactions to people’s requests for money from the Senate majority leader.

The Daily Dot has reached out to Sen. McConnell’s press office for comment—and to see if he’s actually seeing the requests that people are sending him.