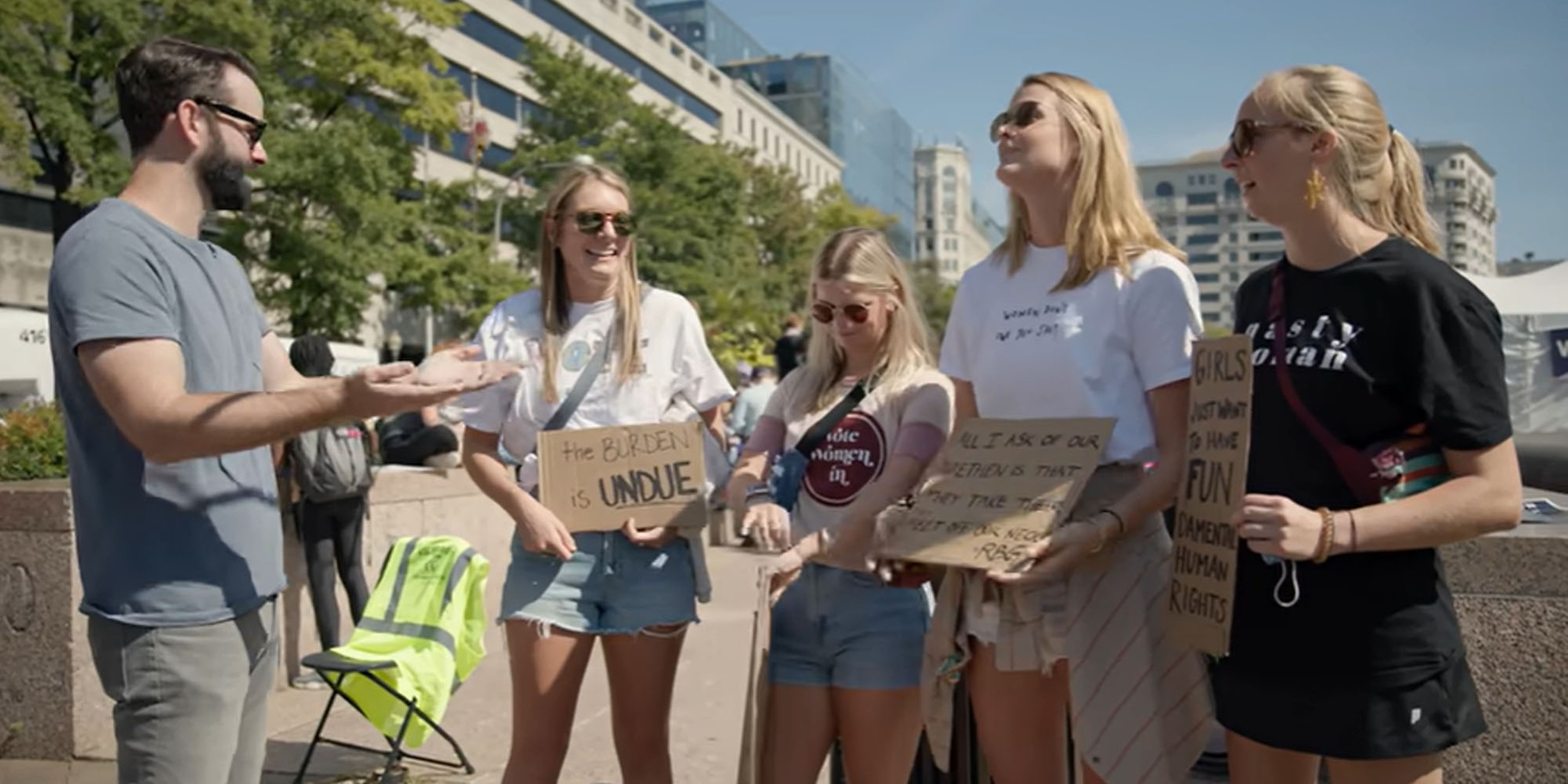 And Twitter is refusing the copyright claim over it.

A transgender man says that Matt Walsh is using his image without permission for a transphobic documentary. He also says that Twitter refused to remove the trailer for the documentary in which his photo appears.

The Daily Dot previously reported that Walsh was behind a fake company duping trans people into being interviewed for a documentary. Walsh tweeted the trailer for that documentary, What is a Woman?, on May 14. The right-wing site Walsh works for, the Daily Wire, produced it.

In a follow-up tweet, Walsh added that they intentionally chose to release the documentary on the first day of Pride Month.

Walsh is a conservative figure who often attacks people who don’t conform to his ideas of what comprises the proper expression of gender and sexuality. This year he’s been on a mission, in his words, to wage “an all out assault on gender ideology.”

To that end, he’s been working on an obviously insincere documentary that critics say will incite further transphobia in which he “investigates” how to define “woman.”

Soon after Walsh released the trailer for What is a Woman?, a friend told Steph Kyriacou that it includes an image of him.

Kyriacou, who works for United Kingdom-based charities for HIV and sexual health, says that Walsh used pictures of him and a friend without permission.

“A picture of me post-top surgery has been used in it without my permission,” Kyriacou tweeted on Thursday.

Gender-affirming top surgery is referred to in medical terms as a subcutaneous mastectomy.

Kyriacou also expressed concern about the impact of the documentary, the trailer for which heavily centers on Walsh mocking transgender people and their allies.

“This film will undoubtedly incite mass transphobia and I will not be affiliated with it in any way. I demand for mine and my friend’s photo to be removed immediately,” Kyriacou wrote.

The Daily Dot confirmed that a photo Kyriacou posted on Instagram appears in the trailer.

Kyriacou told the Daily Dot that he wants people to know how “sick and anxious” he’s felt since learning Walsh used his photo.

“The thought of my face being affiliated with anti-trans media is horrifying enough, but that fear is elevated because my top surgery scars are visible in the photo,” he said via Twitter direct message.

“I’m very proud of my transition and I embrace my scars, but I don’t want my body to be seen/judged/commented on by TERFS and transphobes because I already know they’re not going to say anything nice.” (TERF is an acronym for “trans-exclusionary radical feminists.”)

Kyriacou says his concerns about the effect of Walsh using his image have already been realized.

“I have received multiple transphobic replies and tweets since my original post about the film,” he said.

“We have evaluated your claims and determined no further action is warranted,” Twitter wrote. “Accordingly, we will not be removing the reported content as of this time.”

Kyriacou believes his unidentified friend also filed a DMCA takedown request. He agreed to relay a request for comment to them. That friend hadn’t contacted the Daily Dot as of press time. The outcome of their request is unknown.

“He may prefer to keep his identity anonymous as he isn’t out to many people in his personal life,” Kyriacou said.

Kyriacou also sent Walsh a message asking him to remove his image from the trailer.

“You’ve used a photo of me in your trailer for What is a Woman? and I demand that you remove it from further trailers and the film in general,” Kyriacou wrote, according to a screenshot of the message he posted on Thursday. “I did not give you permission to use my content and do not want to be affiliated with this project in general.”

Kyriacou tagged Walsh in the tweet and added, “I hope you do the right thing here.”

Walsh has not responded, Kyriacou said.

Walsh didn’t reply to inquiries the Daily Dot sent via email and the contact form on his website Friday morning.

Images posted to public profiles on social media are often considered “fair use,” meaning that they can be reposted elsewhere without permission. There are various factors to consider, however. Instagram’s terms include an explanation of such factors, which include whether the content is transformed or used for commercial purposes, in which case it may not be deemed “fair use.”

In addition to the hateful message and replies, Kyriacou has received many supportive comments in response to his complaints about Walsh and Twitter. Some offered advice on how to proceed.

According to the Daily Wire’s website for the documentary, it’s exclusive to members of the site, which requires paying a fee of $12/month. Walsh is also selling a book of the same name as the documentary. It’s not known whether the book includes the images of Kyriacou and his friend.

Although the Daily Wire intends to profit off What is a Woman? and thus his photo, Kyriacou says he’s somewhat relieved that it’s behind a paywall.

“At least it won’t be thrown out into the world completely untethered,” he said.

“We’ve already been through so much as a community over the last few years—this is just another kick in the teeth from transphobes who want to see us gone,” Kyriacou said.