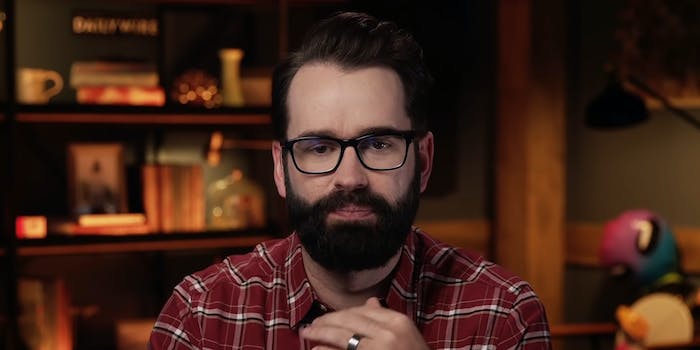 The Gender Unity Project may not be what it seems.

Members of the transgender community are accusing the Daily Wire’s Matt Walsh of being behind a documentary that’s using false pretenses to convince them to be interviewed.

The effort reportedly includes setting up a company via proxy, creating an astroturfed website and Twitter account, and having a producer say the project is an honest exploration of their lives—when in reality it’s all likely a setup designed to attack trans people.

Walsh is a right-wing commentator who’s spent years attacking transgender people and anyone else who doesn’t conform to his idea of proper sexual preferences, gender expression, and identity. A few weeks ago, he declared, “This year, I will be waging an all out assault on gender ideology.” He also has an upcoming children’s book that compares being trans to pretending to be a walrus.

Plotting to trick transgender people, reportedly including children, into being interviewed for a film that would most likely humiliate them would be quite an escalation for him.

Eli Erlick was first to sound the alarm about the documentary. Erlick is a writer and activist and founder of Trans Student Educational Resources.

On Monday, Erlick penned a Twitter thread about her experience with a documentary supposedly being created by the Gender Unity Project.

It began a few weeks ago with an interview request, Erlick said. Erlick posted a screenshot of an email from someone describing themselves as an associate producer of the documentary. They describe the project as “a film exploring the real lives of people in the LGBTQIA+ communities, and to shed some light on the topics of identity, and gender fluidity, in a way that will capture the attention of all Americans and be educational.”

Erlick subsequently talked to the woman, who identified herself as Makenna Lynn, on the phone. Erlick said that the woman seemed nervous and made some amateur mistakes, such as confusing gender fluidity with transgender.

The conversation raised some red flags, Erlick said, but not enough to put her entirely off participating.

“I was under the impression that she may be just a little under-informed and have some funding,” Erlick told the Daily Dot in a phone conversation Tuesday morning. She said that they offered to fly her to their location for the interview.

Her alarm bells went off on Monday when she received the release to agree to be filmed. The company’s name wasn’t on it, which seemed strange. Erlick started digging. She found that Gender Unity Project used a registered agent, shielding the name of whoever owned it. “It’s dubious but sometimes registered agents simply make it easier to incorporate,” Erlick tweeted.

She looked up Makenna Lynn, who said she was an associate producer on the project. Finding nothing, Erlick dug further. A search for the woman’s name and the university she said she’d attended eventually led Erlick to a GoFundMe for a film project organized by a Makenna Lynn Waters, she said.

Everything started falling into place then, Erlick said. Erlick found an IMDb profile for Makenna Waters, which said she’d been a production coordinator for more than 200 episodes of The Matt Walsh Show.

“That’s not a red flag: that’s a gun to your face,” Erlick tweeted.

Waters didn’t respond to an email sent to the address included in Erlick’s screenshot Tuesday morning.

Folk didn’t respond to a Twitter message seeking comment. He also set his tweets to private as the story was unfolding.

“This year, Matt Walsh declared his ‘assault on gender ideology,'” Erlick tweeted. “This is only the tip of the iceberg. Who knows how far he and his followers will go to attack, demean, and dehumanize trans people?”

Erlick closed her thread with a warning for the trans community and a challenge to Walsh himself.

“So, if you’re contacted by these slimy assholes, don’t respond. The last thing we need right now is another ‘gotcha’ anti-trans documentary,” Erlick said.

“And they say we’re the ones tricking people? Your move, @MattWalshBlog,” she added.

The group reportedly contacted Debi Jackson seeking to interview her and her teenage daughter Avery. In 2016, Avery, then nine years old, became the first trans person to be on the cover of National Geographic.

Commenting on Erlick’s Facebook post about the documentary, Jackson wrote, “Because their website was so minimal, I started by asking the most basic questions,” such as whether other trans people were involved and if they were including people who oppose trans rights. Jackson said she was reassured they wouldn’t “include any bigotry” in the film.

Jackson was outraged by Erlick’s findings, in part because she’s long sought a dialogue with Walsh.

“I’ve been tweeting at Matt Walsh for years because he’ll talk *about* our family but isn’t willing to talk *to* us,” Jackson wrote. “I’d love to call them out on that.”

Mixed martial arts fighter Fallon Fox tweeted that she was also contacted by the crew. “They just seemed sketchy and kinda ignorant of trans issues so I said no on an interview,” Fox replied to Erlick’s thread.

The account Erlick identified as belonging to Waters also appears to have been deleted in the last 24 hours. An archive of the account shows that Waters described herself as a producer on Walsh’s show and had recently retweeted Walsh filming himself asking people, “What is a woman?” one of his favorite schticks of late.

Erlick believes that Walsh’s main concern is fueling the outrage machine that he makes his living from by ginning up hatred for transgender people.

“We’re an incredibly easy group to hate because we make up such a small part of the population and don’t have the resources to defend ourselves from the likes of Matt Walsh,” she said.

“This is beyond mean-spirited,” Erlick said. “This is going to lead to deaths.” She believes that Walsh putting out a documentary about transgender people could dehumanize and demean them, and serve as inspiration for anti-trans legislation and familial rejection.

Still, Erlick credits Walsh’s creativity at getting what he wants.

“He is a very intelligent strategist who only has his own best intentions in mind.”

“He is an absolute motherfucker,” she added.