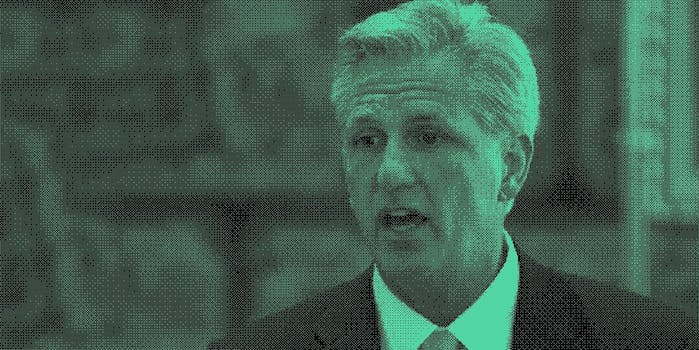 Why is the Internet Association giving an award to a pro-NSA net-neutrality opponent?

This is an odd choice for a group that claims to champion the open Internet.

A major Internet-freedom alliance is preparing to reward one of the most powerful opponents of net neutrality in the United States Congress.

The Internet Association—which counts tech giants like Amazon, Etsy, Facebook, Google, Reddit, and Twitter among its members—announced on March 20 that it would award House Majority Leader Kevin McCarthy (R-Calif.) with its Congressional Internet Freedom Award.

The Internet Association’s decision to celebrate Rep. McCarthy, the second most powerful House Republican after Speaker John Boehner, is curious given McCarthy’s stances on Internet-freedom issues that run counter to those of many open-Internet advocates. For one thing, the California congressman is an avowed opponent of net neutrality. In May 2014, as the Federal Communications Commission debated new net neutrality rules, McCarthy—then the House Majority Whip, the chamber’s third-highest-ranking member—signed a House GOP letter to the FCC warning that Title II regulation represented “a counterproductive effort to even further regulate the Internet.”

Following the FCC’s Feb. 26 vote to reclassify the Internet as a public utility, McCarthy called the agency’s new rules “government overreach.” He said the FCC’s decision was “discouraging and risks the freedom of a system that puts instant info [and] communication at millions of fingertips.”

McCarthy also supports the U.S. intelligence community’s efforts to weaken hardware and software encryption by forcing companies to put backdoors in their products. In June 2014, he voted against an amendment to prohibit the NSA from operating backdoor surveillance programs.

That amendment, which passed 293-123, was introduced by Rep. Lofgren, alongside whom McCarthy is about to be fêted by the Internet Association. (At press time, Lofgren’s office had not responded to a request for comment.) A similar amendment failed in the Senate, meaning that the prohibition never became law. If it had been enacted, Lofgren’s amendment would also have forbade the National Security Agency from accessing the communications of American citizens without a warrant.

Rep. McCarthy’s office did not respond to multiple requests for comment about the majority leader’s Internet-policy record.

Noah Theran, a spokesman for the Internet Association, disputed the notion that awarding McCarthy undermined the group’s activism on issues where they disagree with the congressman.

“Issues important to the Internet do not cut along traditional party lines,” Theran told the Daily Dot in an email. “When evaluating the awardees, we looked at the totality of a legislator’s record.”

Theran pointed to the role McCarthy played in advancing a key tech-industry priority: patent reform. Under McCarthy’s floor leadership, the House passed the Innovation Act 325-91 in December 2013. Tech companies hope that the bill, which is designed to cut back on frivolous lawsuits from so-called “patent trolls,” will soon pass the Senate.

In a statement, Internet Association President and CEO Michael Beckerman said that the three members of Congress receiving awards “all understand and champion the critical role the Internet industry plays in our economy.”

The rest of the Internet freedom community did not seem to share that assessment of McCarthy.

“This award is absurd,” said Charlie Furman, a campaigner with open-Internet group Fight for the Future, in an email. “Representative McCarthy is trying to turn the Internet into a nightmare of Comcast-enforced slow lanes and has repeatedly voted to let the NSA continue vacuuming up everyone’s data.”

Theran would not address how the Internet Association could still effectively criticize McCarthy on issues like net neutrality and encryption after naming him an Internet-freedom champion, promising only that the group would “continue to educate lawmakers on our positions and advocate on behalf of our members.”

“The Internet Association has and will continue to advocate for strong net neutrality rules and believes that Internet companies have a duty to ensure the security and privacy of user data,” Theran said, “which is why government access to user data should be rule-bound, transparent, and tailored.”

Furman, whose group has been at the forefront of grassroots efforts to pressure lawmakers on surveillance reform, called McCarthy’s record “literally the opposite of protecting Internet freedom.”

The controversial decision to celebrate one of Congress’ highest-ranking opponents of key open-Internet priorities marks a strange twist in the nascent political activities of the Internet Association, which launched in late July 2012. The group has a political action committee, but it has not yet donated to candidates. Theran said the group planned to begin donating during the 2016 campaign cycle.