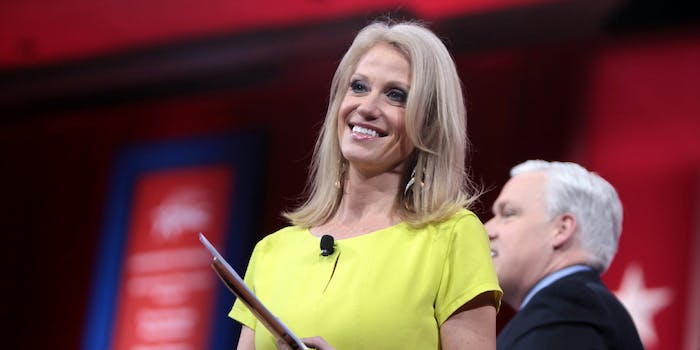 Officials will investigate if Kellyanne Conway violated the Hatch Act

The complaint stems from an interview she gave with 'Fox & Friends' last week.

The U.S. Office of Special Counsel said it will open a case to determine if White House counselor Kellyanne Conway violated the Hatch Act last week when she appeared to advocate for Alabama Senate candidate Roy Moore over his opponent Doug Jones, a Democrat.

Walter Shaub, a senior director at the Campaign Legal Center and former director of the Office of Government Ethics, tweeted a photo of an email he received from the U.S. Office of Special Counsel that said it will “open a case file to address this matter.”

Shaub wrote an op-ed in the Washington Post alleging that Conway violated the Hatch Act, a federal law that prohibits public employees from engaging in political activity. The act, passed in 1939, bars federal employees from advocating for candidates.

White House Social Media Director Dan Scavino Jr. violated the Hatch Act earlier this year and was warned by the Office of Special Counsel after he tweeted for the “#TrumpTrain” to defeat a Michigan Republican who had been critical of President Donald Trump.

The complaint against Conway stems from comments she made during an interview with Fox & Friends last week. During the interview, Conway suggested that Moore–despite facing numerous women saying he engaged in sexual misconduct with them–was needed to help pass the Republican’s tax plan overhaul.

Conway bashed Jones as a “doctrine liberal” during the segment.

“I just want everybody to know Doug Jones,” she said. “Nobody ever says his name, and they pretend that he’s some kind of conservative Democrat in Alabama, and he’s not.”

In his Washington Post op-ed, Schaub said Conway’s comment were an “obvious” violation of the Hatch Act and that the Campaign Legal Center had filed a complaint against her.

“The White House has offered typical misdirection in response, asserting that Conway was innocently championing the president’s agenda,” he wrote. “The question is not whether Conway was championing the agenda of the president — who, it’s worth noting, actively supports Moore — but whether she was advocating against Jones. Only in a world of alternative facts could Conway’s televised words amount to anything other than advocacy against Jones.”